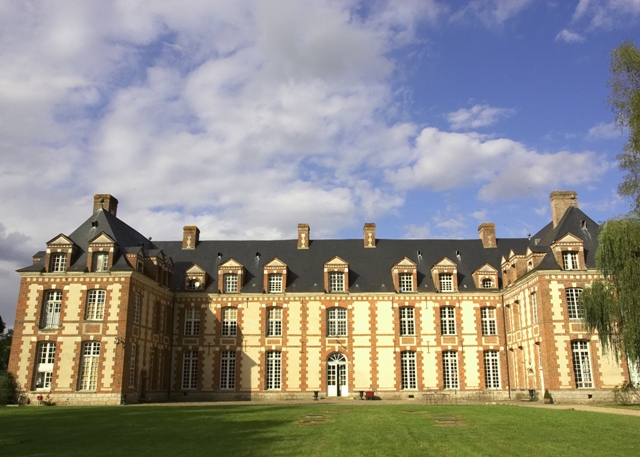 Location: Rosay-sur-Lieure, in the Eure departement of France (Haute-Normandie Region).
Built: 17th century.
Condition: In good condition.
Ownership / Access: Privately owned.
ISMH Reference Number: PA00099536
Notes: Château de Rosay-sur-Lieure is a French castle of the seventeenth century located in the town of Rosay-sur-Lieure in the department of Eure (department) and the Normandy region.The castle is the subject of a registration as a historic monument since 31 January 1938.Since 2005, the Château de Rosay is dedicated to hosting business seminars.Until the seventeenth century, the Stronghold of Rosay is a vast territory inherited from the conquest of Normandy Rollo who returned to the family Marigny.The Castle of Rosay is composed of two parts: the central part built in 1611 and the two wings on each side in 1619. The architecture of the castle is characteristic of the tricolor style called "Louis XIII style" with its blue slate pink bricks laiteux and plaster. During the seventeenth century, it was acquired by Nicolas Fremont, adviser to the Parliament of Rouen, to whom Louis XIV erected in Marquisate earth Rosay. The revolution spared the Castle because of the quality of Louvetier its owner.In the nineteenth century, under the Apollonia radiation Valon, the Castle became Literary Salon and greeted most romantic writers and artists such as Gustave Flaubert, Prosper Merimee, Maupassant, Charles Perrault and Théophile Gautier6. In 1938, the last of the family Valon can not maintain it, he sold the property to the Quevillon family. The garden and the park were gradually fragmented, despite an order for registration in the inventory historiques monuments.La Castellane family then took the Castle and to revive it, opened it to the public for the first fois.