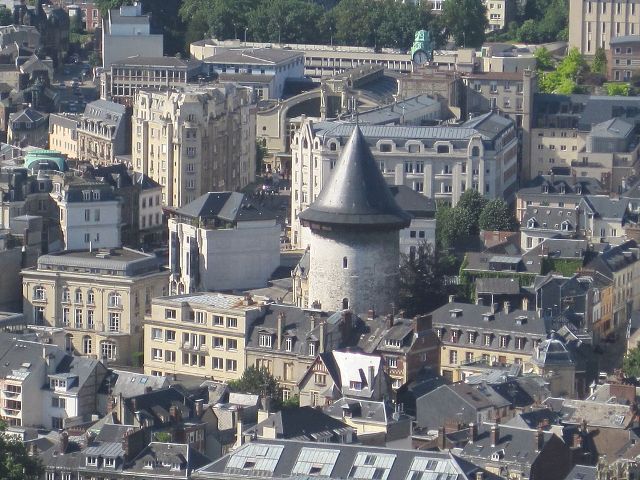 Location: Rouen, in the Seine-Maritime departement of France (Haute-Normandie Region).
Built: 12th century.
Condition: In good condition.
Ownership / Access: Privately owned.
ISMH Reference Number: PA00101012
Notes: Château de Rouen is built from 1204-1210 on the Eurasian hill in Rouen, the capital of the Duchy of Normandy by Philip Augustus, King of France, following the conquest in 1204 the Duchy of King John, Duke of Normandy King of England, and replacement of the ducal palace of Rouen erected by Duke Richard I. This will now be the residence of the royal officers and the king when will stay in Rouen. Located outside of the medieval city, overlooking the castle of Rouen is a powerful type of castle fortress that played a military role during the Hundred Years War (1337-1453) and during the Wars of Religion (1562 -1598).For nearly four hundred years, the castle of Rouen is mainly the seat of an important administrative and political function: Bailiwick and viscount of the King of France, Government of the King of England during British rule (1418-1449), chessboard Normandy (later the Parliament of Normandy). It is also the castle of Rouen that Joan of Arc was imprisoned in December 1430 and found to be from 21 February to 23 May 1431. Vulnerable to artillery fire like other medieval fortresses, the castle of Rouen was dismantled by Henri IV in 1591, with the exception of the tower (tower told Joan of Arc).Recent archaeological excavations and new works of historians show the importance of the castle, example of medieval military architecture, especially the Philippian architecture.