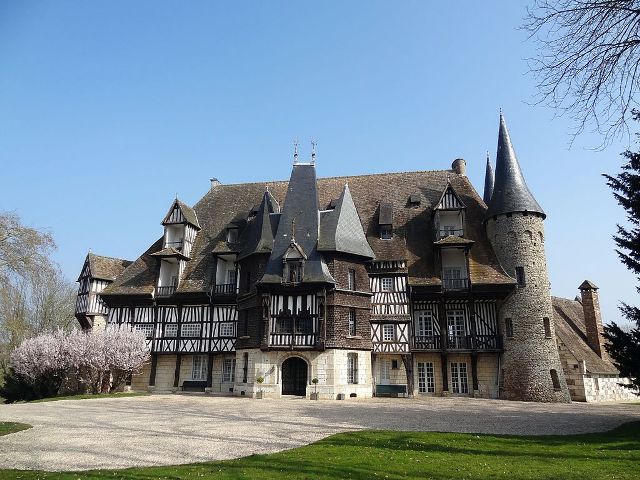 Location: Louviers, in the Eure departement of France (Haute-Normandie Region).
Built: 13th century.
Condition: In good condition.
Ownership / Access: Privately owned.
ISMH Reference Number: PA27000066
Notes: Château Saint-Hilaire is a castle located south of Louviers, in the Eure department of Normandy.Located south of Louviers Acquigny on the road, in the department of Eure, the area is bordered by the Eure.The dwelling is constituted originally one building to the massive and mundane neoclassical architecture, built in 1880.In the early twentieth century, the area is part of the stronghold of the Hawk, owned by Roger Maldéré. It will be confiscated by Henry V of England at the expense of Philippe Baude during the Hundred years. After which the estate was bought by Jean Le Roux, a bourgeois rouennais, which transmits it to Robert Le Roux - lord of the Épervier. His niece Catherine will inherit the Garden in 1582, before marrying Charles Romé. Pierre Romé - lord of Thuit and Treasurer of France in Rouen office under Louis XIII - will inherit his TOUR. In 1681, Nicolas Romé meets its strongholds Hawk, Maupertuis, and Folleville Bouteiller as the Folleville until 1692, when Marie Romé married Pierre-Jacques Viconte, Sieur de Saint-Hilaire. In the eighteenth century, Marie-Angélique Joseph inherits the Viscount of Saint-Hilaire and married the Marquis de Marguerit. In the middle of the nineteenth century, Count Odoard Hazey of selling the domain to Mr Sée, former prefect, who built a large neo-classical building in 1880. The main building is in stone on three levels with attic mansard , with a front-body canted brick, surrounded by a terrace lined with mâchicoulis. In 1901, Jules Audresset buys the building, then passes it to its girls. She married Pierre Reveilhac that in 1907 the architect Henri Jacquelin mandate to transform the building into château3 whose architecture recalls the late Middle Ages with timbered houses from the old Évreux. The house was sold in 1925 to the US Major Walter V. Cotchett, occupied during the 2nd World War and then abandoned. Videlec the company bought the estate in 1989 and conducts its restoration.The castle is listed as historical monuments in 2002.