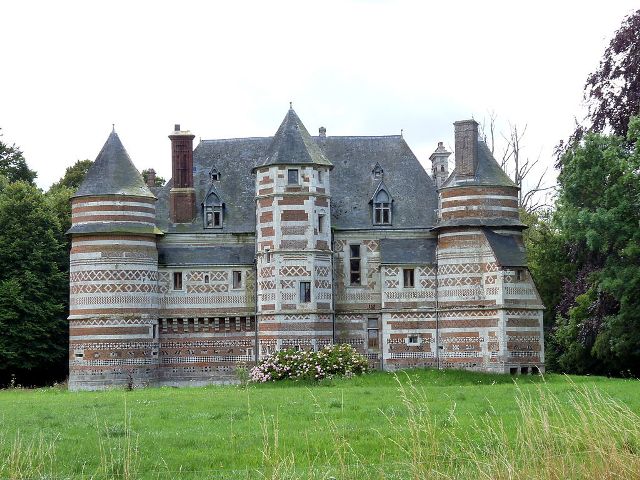 Location: Oherville, in the Seine-Maritime departement of France (Haute-Normandie Region).
Built: 11th-12th century.
Condition: In good condition.
Ownership / Access: Private property.
Notes: Manoir d'Auffay is located in the town of Yerville (Seine-Maritime) in Caux.Originally was a feudal system of the eleventh and twelfth centuries as evidenced by the mound near the house, which belonged to the seventeenth century to the family of Houdetot. This is probably Jacques d'Holbach (died in 1513) and his nephew Antoine (died after 1531) who built the present mansion. The home dates from the early years of the sixteenth century and was modified shortly after the marriage of Antoine de Houdetot and Catherine Canonville-Raffetot (including the lobby). Some work (southern facade) are the work around 1900 by architect Emile Janet Rouen. The dwelling consists of a rectangular body flanked by two corner towers and a polygonal tower at the center of the north side, and a south southwest tower facade. The construction is characterized by a succession of alternating beds of brick, limestone and flint component rich décor. The assembly has a fortified appearance (ditches and small openings) on the north side, which is opposed to a southern front where the decor of the late fifteenth and sixteenth centuries is required. The coffered ceiling of the hall, dated 1523, is assigned (without proof) to Jean Goujon. The estate also includes a dove in the same style and a castle mound still encircled by a moat. This area is now a private residence. It can be visited during the summer, during Heritage Days and its dovecote. Cultural events are frequently involved (exhibitions, openings, theater ...). The castle is the subject of a registration as a historic monument since 2 February 1932. The dovecote is the subject of a registration as a historic monument since September 6, 1996. The mansion has recently changed ownership and has undergone substantial rehabilitation.

How To Get To Manoir d'Auffay (Map):