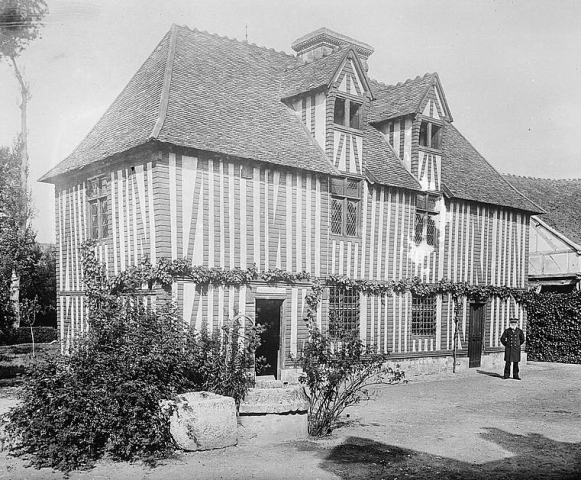 Location: Petit-Couronne, in the Seine-Maritime departement of France (Haute-Normandie Region).
Built: 18th century.
Condition: Restored.
Ownership / Access: Now a Museum.
Notes: Musée Pierre-Corneille is a museum dedicated to the writer Pierre Corneille, located in Petit-Couronne, near Rouen. typically Norman manor house with wood sides and essentage slate, he served as "home field" the playwright. The mansion, "a hovel and bastie Lowblood a house, barn, bakery and ESTABLES" was bought by the father of Pierre Corneille June 7, 1608 with the vast lands (24 ha of grassland, plowing, wood-coppice) which dépendent1. Serving as "home field" (term for a second home at the time), the manor was discovered by the father of Pierre Corneille "special master of Waters and Forests of the bailiwick of Rouen" during an investigation in the forest of La Londe-Rouvray and allowed to keep children away from the city (including child of Pierre weak and stupid) and its epidemic but it is not: it is a purchase to resolve Mortgage uncle on this property. The father of playwright mistakenly thought the land lease also ensure each of his seven children a comfortable pension. The writer inherits in March 1639 and his eldest son sold it in 1686. The house remains private property during two centuries. It is since 1874 the General Council of the Seine-Maritime undertaking restoration work until 1879 and is under the responsibility of the county museum of antiquities. It is the subject of a classification as historical monuments since February 13, 1939.

How To Get To Musée Pierre-Corneille (Map):