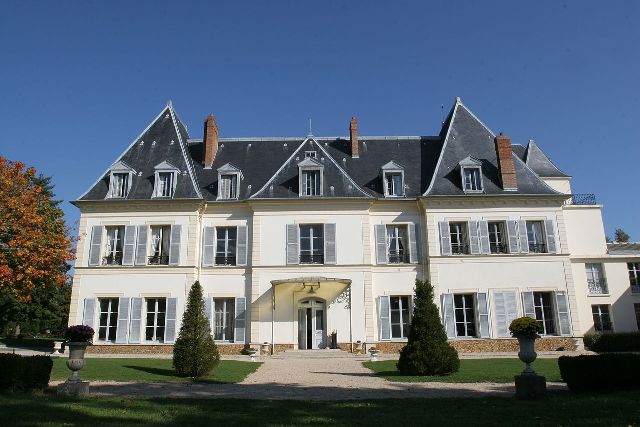 Location: Fontenay-Trésigny, in the Seine-et-Marne departement of France (Ile-de-France Region).
Built: 17th century.
Condition: In good condition.
Ownership / Access: --
Notes: Château d'Écoublay is a French castle of the seventeenth century located in the town of Fontenay-Trésigny in the department of Seine-et-Marne and the Île-de-France region.Former secular fief that belonged to the late twentieth century in Courtenay, it goes to a family of Montceaux. Under Louis XIV, we see the canons of the Sainte Chapelle in Paris to qualify high lords justices of Ecoublay-the-Hardy. The old manor house and farm canons then belonged to Mr. Baron of Perthuis Laillevault in 1879, Mr. Daniel Wilson, English-born engineer, who had acquired them in 1846. He had commanded the painter Eugène Delacroix painting of a Assurbanipal (king of Assyria in the Greek tradition), the Death of Sardanapalus, now exhibited in the Louvre. The rear wing of the castle was built for this monumental canvas ... fact stated in the letters of Delacroix published at Plon. From 1951 to 2000, Pres of Ecoublay are inhabited by the Brotherhood of Scalabrini, Italian monks, that will make Ecoublay during this half century, a place of cultural exchange and religious seminaries. Monks, priests, canons from around the world (Brazil, Africa, India ...) while living in community and give the castle, over the years, its rural soul, authentic and joyful. Since 2000, Pres of Ecoublay is a site dedicated exclusively to the hospitality business seminars.