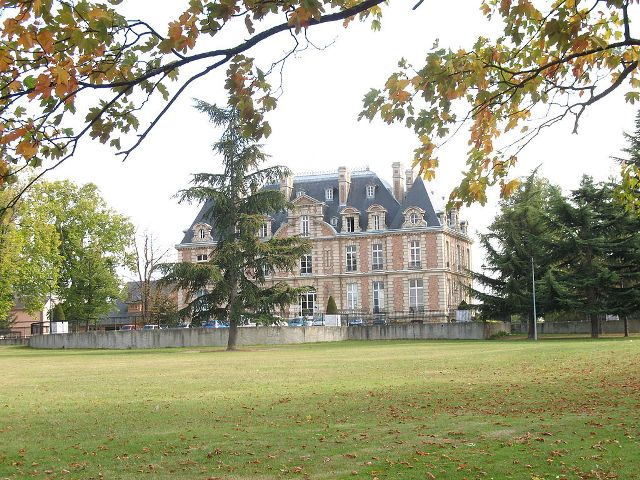 Location: Les Mureaux, in the Yvelines departement of France (Ile-de-France Region).
Built: mid-19th century.
Condition: In good condition.
Ownership / Access: --
Notes: Château de Becheville is located on the plateau of Becheville, town of Mureaux in the Yvelines department.The present castle, which dates from the mid-nineteenth century, was built in the style of the Second Empire to the mix of styles. The roof is slate. The symmetrical facade has a brick veneer. Stones adorn the wall ties and windows. In high-ceiling rooms, windows (dormers and œils-de-ox), tapestries and mirrors still bear witness of the Empire style. The wall paneling are inspired by Pompeii: Roman head in a medallion, motifs of flowers and animals (dove, butterfly), frieze of flowers surrounding the room. There is also a private hunting and a music room. The castle has an oil on canvas entitled The Fall or the rest after the hunt, which was restored in the late twentieth century. This is an old copy of a work by François Boucher dating from 1734 and disappeared. In the same room, is another painting of a horseman watering his horses at a fountain. A row of small hooks recalls that the castle was once converted into a school. A park, which initially covered 22 hectares, facing the castle. A cooler was used to preserve supplies.

How To Get To Château de Becheville (Map):