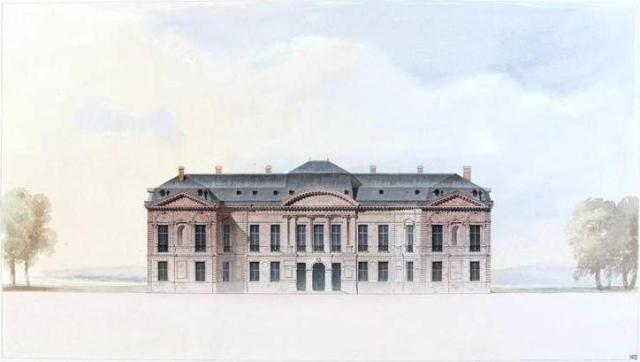 Location: Charenton-le-Pont, in the Val-de-Marne departement of France (Ile-de-France Region).
Built: 16th-17th century.
Condition: In good condition.
Ownership / Access: Privately owned.
ISMH Reference Number: PA00079859
Notes: Château de Bercy was a castle built in the seventeenth century and ended in the early eighteenth century in Bercy (in the built part to the town of Charenton-le-Pont in 1860), which was destroyed in 1861. The castle of Bercy was built from 1658 by François Le Vau for Charles-Henri de Malon de Bercy, Marquis de Nointel intendant of finance, in an exceptional site boasts a beautiful view of the Seine. The park extended to Paris and was appointed, according to tradition, by André Le Nôtre. At the death of Francois Le Vau in 1676, the castle was not finished; is Jacques La Guépière who undertook to finish and expand between 1702 and 1715. He built including common and stables, partly preserved (common entrance pavilions: our 109 and 114 of the current rue du Petit-Château in Charenton-Le-Pont, the road follows the route of the old alley cross the forecourt of the castle). Bercy The castle was at the height of our 10-16 of the current Marius Delcher street. The main and side facades and the corresponding hedges 114 rue du Petit-Château are subject to registration as historical monuments since October 23, 19591. The facades and roofs of the hunting lodge of the old castle except the wing in return, subject to a classification as historical monuments since January 3, 1966.