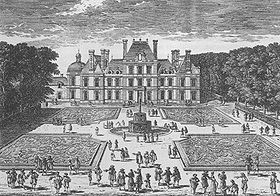 Location: Fresnes, in the Val-de-Marne departement of France (Ile-de-France Region).
Built: 1623-1625.
Condition: Ruined.
Ownership / Access: Privately owned.
ISMH Reference Number: PA00079876
Notes: Château de Berny is a ruined castle, which was located in what is now the Val-de-Marne, in Fresnes, on the border with Antony in the Hauts-de-Seine, on the road from Paris to Orleans. Some vestiges still existed in 1956 to No. 4 of the walk Dam.The stronghold of Berny (Bernies) is mentioned for the first time in 1422, when it passes Jehan Bag, citizens of Paris.There is more information until 1520 that appear as owners, Brûlart, parliamentarians family. Peter I Brûlart, counselor to the parliament of Paris, says the Lord of Berny, and his wife Marie Cauchon, lady Sillery. The estate goes to their son, Nicolas Brûlart Sillery, Chancellor of France. The castle undergoes minor changes, some of which were directed by the famous architect Métezeau Clement, author of the dam seat of the Protestant city of La Rochelle by Richelieu (1628). In 1623, Pierre II Brûlart Sillery, son of Nicolas, Vicomte de Puiseux, Secretary of State for Foreign Affairs (1617-1626), Marquis de Sillery, baron of the Grand Pressigny, ambassador to Spain, charged Mansart, then unknown young architect, transform thoroughly the castle. The work was completed in 1635 and it already shows Mansart in full possession of his faculties, which will tell before this wonder Isaac Benserade, speaking of Mansard: Done at Sillery, otherwise so sober man spend more crowns than does the turban house to house while a backbench It is they who had built this castle Claude de Chatillon engraved in the early seventeenth century with the caption: "Berni, bastie newly pleasure house, with its access and paisage circumjacent".