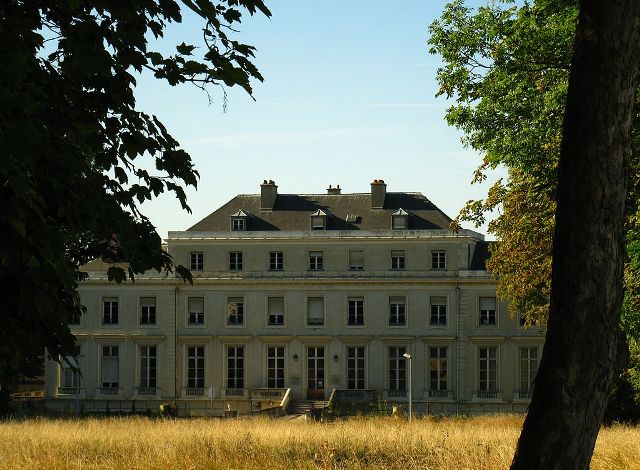 Location: Limeil-Brévannes, in the Val-de-Marne departement of France (Ile-de-France Region).
Built: 18th century.
Condition: In good condition.
Ownership / Access: Owned by a public institution.
ISMH Reference Number: PA00079884
Notes: Château de Brévannes is located in the town of Limeil-Brévannes, in the department of Val-de-Marne.The presence of a medieval castle with towers, moat, turrets is attested since the early fourteenth century and belongs to the family of Corbie. Under Louis XIV, the gardens were designed by Le Nôtre. Marc Henri Le Pileur of Brévannes, the king's counselor, president of the Chamber of Accounts Paris, bought in 1786 the old castle in poor condition. He ordered its demolition and built this "elegant mansion of Louis XVI." It does little benefit, because at the beginning of the Revolution, to escape arrest, he must flee abroad. On his return from emigration, he sold the field. In 1803, the castle was bought by Pierre Marie Muguet of Varange son of a bourgeois family of Lyon after a lace-master. Pierre-Marie Varange was born in Lyon 1759 and married there 15 August 1791 Caroline Marie Andrieu of Turdine, daughter of a merchant. Under the Empire, he became receiver general and regent of the Bank of France, and Baron in 1810. He was mayor of Limeil-Brévannes from 1806 to 1817. He died December 12, 1818 in Paris, 8 rue d'Orléans. He was buried in Limeil-Brévannes. The castle was occupied by the Austrians in 1814. In 1823 it was acquired by the banker Jean-Charles Clarmont. In 1824 he became the property of Hebrew philologist Sarchi Philippe (1765-1830), then he passes to his son stockbroker Sarchi Philippe Benoit (1800-1864), and his widow who lived until 1870 . After the war of 1870, it was occupied by the Prussian troops. Prince Achille Murat (1801-1847), nephew of Napoleon I, bought the property in 1874 and the fact refurbish. Enthusiast card game, he would have lost to Baron Rodolphe Hottinger (1835-1920), a rich Parisian banker who is not interested in the property. In 1883 the estate was bought by the Public Assistance for there to a hospital with clinic for seniors. It was enlarged in 1886 to make it an area reserved for households. An additional area is built in 1891 for the chronically ill. In 1907, a set of buildings for tuberculosis patients was built by architect Paul Louis Renaud. An area reserved for sick children is built, the Leon Bernard pavilion. A sanatorium was built around 1915. The set is now called the Emile-Roux hospital. The pigeon is the subject of a registration as a historic monument since January 25, 1980, while the castle and its surroundings listed since September 3, 2002.