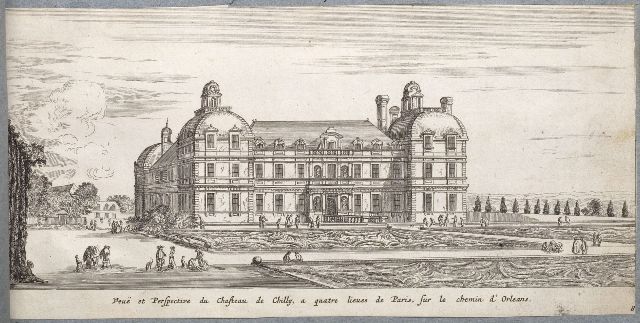 Location: Chilly-Mazarin, in the Essonne departement of France (Ile-de-France Region).
Built: 17th century.
Condition: Ruined.
Ownership / Access: Privately owned.
ISMH Reference Number: PA00087857
Notes: Château de Chilly-Mazarin is a French castle in the town of Chilly-Mazarin, in Hurepoix country, in the department of Essonne and the region Île-de-France, seventeen kilometers southwest of Paris . The present castle was built on an embankment lawn framed by moats crossed by a bridge with three arches supporting a monumental gate. The north side of the courtyard is closed by joint consists of two square pavilions with two floors topped by a slate hipped roof, connected by a roof mansardé6 building. The main building is built in stone, a main body is framed by two symmetrical pavilions set back from the facade, everything is high on four floors, the last attic. Three bays are pierced at each level of the main body and on each collateral, two œils bull's overlook the side windows at the roof made of slate and zinc hipped. The castle park is still composed of a canal south and decorated with a madness for look for the aqueduct bringing water ponds.