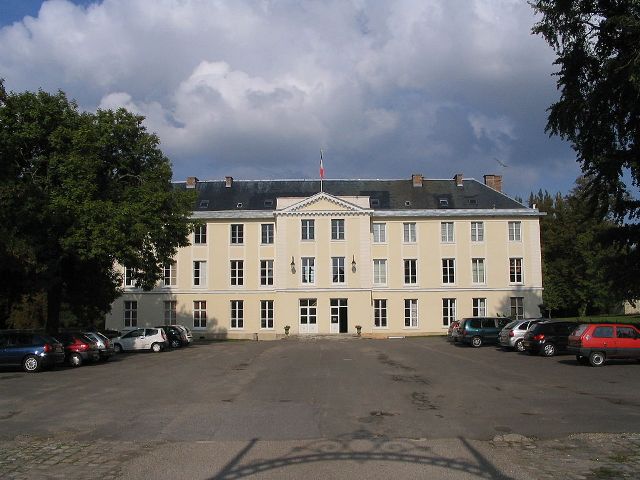 Location: Tournan-en-Brie, in the Seine-et-Marne departement of France (Ile-de-France Region).
Built: 1770.
Condition: In good condition.
Ownership / Access: Now a Social residence.
Notes: Château de Combreux is a castle of the eighteenth century located in the town of Tournan-en-Brie (Seine-et-Marne).The first mention of a castle, then owned by Gervais Combreux, dates back to the twelfth century. It seems that nothing remains of the first building. The fourteenth to sixteenth centuries, this fief belongs to the family of the Mineray and met one of Armainvilliers. The present castle was built from 1770 to Louis de Jaucourt (1726-1813), first gentleman of the Prince of Conde. His son, the Marquis de Jaucourt, Mayor of Presles and MP for Seine-et-Marne, it maintains many troops that make up his personal guard and it gives under the Restoration, which marked the peak of his political career, wonderful holidays . "The Castle of Combreux, owned by the Marquis de Jaucourt, Minister of State, Peer of France, has been newly reconstructed; it is simple, but large, and charming aspects: on one side it overlooks the park contains about 160 acres; and the other on a pretty valley. The park is crossed by the stream that passes Tournan, and this stream feeds a pond extent, the fall of which turns a mill, and is lost in the abyss of Vilgenard, municipality of Presles. A blend of sections on the approval, and several other abandoned to culture, gives this property an all-in-fact nature landscape. Jaucourt cares for agriculture, and raises a merino flock that is distinguished by its beauty. The strain was taken entirely in Rambouillet and Malmaison. " The Marquis de Jaucourt dies Combreux castle in 1852. His heirs sold the property to Jules-François Hennecart, Member of Vienna, who is mayor of Presles from 1856 to 1870. He died in 1888 at the castle.In 1896, the castle was given to the Sisters of Saint Vincent de Paul with a view to create a retirement home for nuns. From 1915 and until 1930, the nursing home is replaced in ancient adjoining farm, by a first orphanage for girls. From 1931 to 1940, he became orphanage for boys transferred from the orphanage Vaugirard. From 1939 to 1941, Combreux hosts St. Joseph Matzenheim school who had to flee Alsace before the German army. From 1940, the institution welcomes non-orphans, but from large families or with social unrest. In 1950, the estate receives a small seminar under the direction of Father Constant. In the early 1960s, the minor seminary is replaced by a college and a high school. The school, for lack of religious teachers and not approved by the state, closed its doors in 1984. The castle houses since 1998 Social residence Frederic Ozanam, managed by the Fondation d'Auteuil, which includes a hostel for young workers, emergency shelter, a shelter and rehabilitation and micro-nursery . It can accommodate up to one hundred and twelve young adults aged 18 to 25 who have completed a professional project. These residents are single, with or without children, who have a job, which in seeking or are in training. The residence offers each person assistance to social and professional reintegration. Depending on their project, residents can stay at the chateau a few months to two or three years.