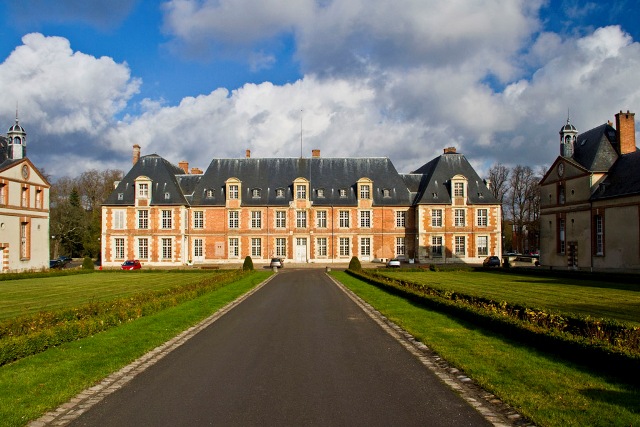 Location: Thiverval-Grignon, in the Yvelines departement of France (Ile-de-France Region).
Built: 17th century.
Condition: In good condition.
Ownership / Access: --
Notes: Château de Grignon is a castle of the seventeenth century located in the French town of Thiverval-Grignon, in the Yvelines department. It is currently owned AgroParisTech.Grignon Castle was built in 1636 by Nicolas Bellievre, Marquis de Grignon and lord of Neauphle son of Pomponne Bellievre (1529-1607), President mortar Parliament of Paris and Chancellor of France until his death, which had purchased the domain to Diane de Poitiers in the sixteenth century.At the French Revolution, after the last Marquise de Grignan, Madame de Brassac, the area becomes the property of Mr. Auguie whose daughter married Marshal Ney in 1802. The marriage was celebrated in Thiverval in the mayor's house (later called Castle Thiverval). The future Marshal of Bessières Istries who bought him the castle, the park land and farms Grignon in 1809, his widow puts on sale in 1826. The auction takes place in favor of Charles X that makes the Institution Grignon agronomic Royal. This Grignon School of Agriculture will change several times of name: it becomes the Imperial School of Agriculture in 1852, the National School of Agriculture in 1870, Grignon National School of Agronomy in 1960 and the 'Institut National Agronomique Paris-Grignon in 1971. it is now AgroParisTech, making it the oldest agricultural schools and agronomy French. Students spend there the first year of their education in school, and are housed in nearby residences of the castle. Research laboratories are also installed on the site (laboratories INRA Versailles-Grignon or associated laboratories as CETIOM) and the administrations of INRA. It is planned to sell it to make the PSG training center and establish the school on the Plateau de Saclay.

How To Get To Château de Grignon (Map):