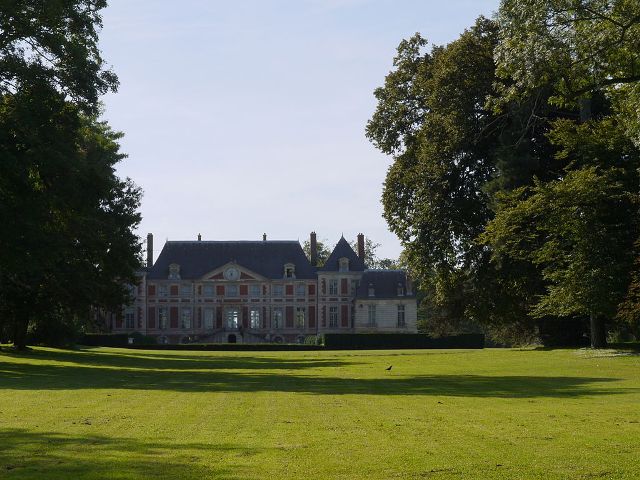 Location: Guermantes, in the Seine-et-Marne departement of France (Ile-de-France Region).
Built: 17th century.
Condition: In good condition.
Ownership / Access: Privately owned.
ISMH Reference Number: PA00087025
Notes: Château de Guermantes at Guermantes, is a house of Seine-et-Marne (Île-de-France); he inspired Marcel Proust the name of one of his aristocratic characters in search of lost time. However, the castle of Guermantes does not appear in the work of Proust, directly or indirectly. The castle is the subject of rankings as historical monuments since August 9, 1944 and December 21, 1970.Pierre Viola (died 1638), whose family owns the stronghold of Guermantes from the mid-sixteenth century, began building the castle. In 1665, Claude, retrieve the property. In 1698, Paulin Laying Egg (1650-1723), Grand audiencier of France, bought the estate where he undertakes extensive work for which he uses Mansart for both staircases and André Le Nôtre for the garden, which includes a large "water mirror". Finance catcher in Lyon, he became one of the most powerful financial time of the Sun King; THERE organized memorable parties at the castle, whose long ceremonial gallery of 31 meters, "showpiece" of the house has retained its luxurious paneled decor, chandeliers and painted canvas, attributed to Robert de Cotte and executed by a certain Jean Hanard who is visibly inspired, like others, the "Hall of Mirrors" of Versailles. In 1812 the architect Antoine Léon Vaudoyer Thomas (1746-1846) drew, for the lords, aviaries studies. At the end of the nineteenth century, the last descendant of Prondre, known for his outspokenness acerbic, who did not hesitate to interrupt the sermon of the parish priest, had ironically nicknamed the wealthy industrialist Menier chocolate "Baron Cacao" ... In 1920 Guermantes was sold to a timber merchant who began to liquidate its forest estate and sold to the highest bidder almost all of the furniture, but their subdivision creation or development of a clinic were unsuccessful. Twice saved by Hottinger: Just before 1939 the estate was acquired by the banker Maurice Hottinger (1872-1969) of an old Zurich family that had created a bank in Paris, before 1789, then participated in the creation of the Bank of France. Jean-Conrad Hottinger was appointed Baron of the Empire, September 19, 1810. He then passed to his son Pierre (1917- 2006) "which surrounded it with informed care" by Claude Frégnac. In 1944 the castle was threatened with destruction by the troops of occupation in retaliation for the execution of a German soldier by resistant, but was preserved through the mediation Blanche Hottinger, born of Maupeou. Nowadays if the furniture has disappeared, several pieces retain their painted decoration of the seventeenth century and eighteenth century. Sold in 2008, the castle was transformed into a conference center and is not worth visiting. The company is called "Châteauform".

How To Get To Château de Guermantes (Map):