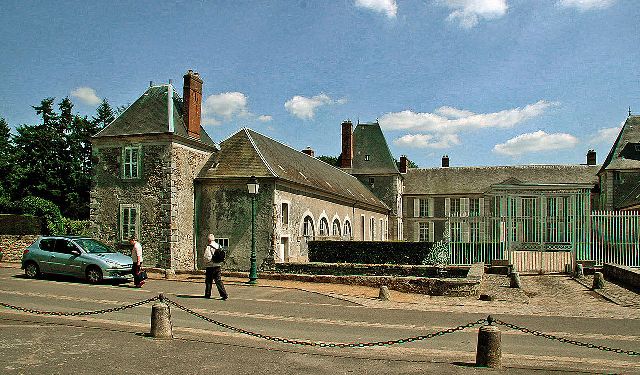 Location: Janvry, in the Essonne departement of France (Ile-de-France Region).
Built: 17th century.
Condition: In good condition.
Ownership / Access: Privately owned.
ISMH Reference Number: PA00087927
Notes: Château de Janvry is a French castle in the town of Janvry in the department of Essonne and the region Île-de-France, twenty-seven kilometers southwest of Paris. The castle is built on an embankment surrounded by a moat. It is built according to a plan "U" around a square courtyard fifty meters square surrounded by lawns and shrubs. Access to the main building via a bridge built over the moat and leading to the massive gates of the castle, opening onto the "courtyard". Prior to arrival at the castle, a long avenue of poplars leads to the courtyard. This alley was the historic entrance of the castle and is now maintained by grass due to asphalt road that separates the driveway of the castle. The main body respects a typical Louis XIII architecture. Consistent with the era of style, the castle has its own unique asymmetry in the Louis XIII style. The west wing has four windows on the left of the main door, three on the right. The façade has five windows on the right side of the main door, and four on the left. The castle is surrounded by fourteen hectares of enclosed park. The park is surrounded by walls millstone on the largest part of the circumference. Ten hectares of woodland and grassland two hectares up this often redesigned park with old trees. A pond and a tennis court are also located in the park. In the park of the bottom, the original cooler used to keep ice packs is still visible. A legend tells that the castle of Janvry, the castle of Saint-Jean-de-Beauregard and monastery (now defunct) located near Arpajon were connected by a network of underground tunnels. These tunnels have been built to be able to escape in case of danger. Traces of tunnels are actually visible in the park, but no confirmation could be found on the length or purpose of these tunnels.

How To Get To Château de Janvry (Map):