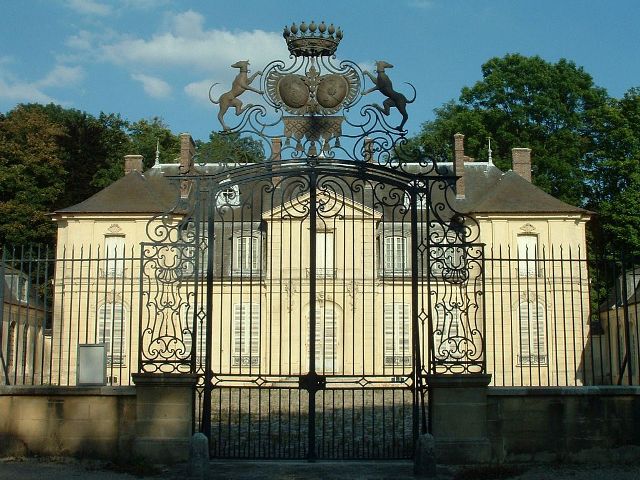 Location: Jossigny, in the Seine-et-Marne departement of France (Ile-de-France Region).
Built: 18th century.
Condition: In good condition.
Ownership / Access: State property.
ISMH Reference Number: PA00087036
Notes: Château de Jossigny is a rococo castle of the eighteenth century, located in Jossigny, in the French department of Seine-et-Marne.Jossigny Castle was built in 1753 for Claude Francois Leconte of Gravel, adviser to the Fifth Chamber of Investigations of the Parliament of Paris, by the architect Jacques Mansart Sagonne (° 1711 - † 1778), the last of the Mansard illustrious dynasty. Located 32 kilometers east of Paris and 6 km south of Lagny-sur-Marne, it is one of the most perfect examples of application of the Treaty of Charles Étienne Briseux, The art of building houses campaign, published in Paris in 1743. He is also a valuable testimony of the architecture of a rock house in the middle of the eighteenth century in all its most charming and picturesque. In addition to its architect, Jossigny among the recently identified achievements of the great decorator seed Nicolas Pineau (° 1684 - † 1754). Jossigny land belonged to the Middle Ages to Cyprian Freil, bourgeois of Lagny-sur-Marne. November 4, 1359, he sold the land to Pierre Orgemont, adviser to the king. Family Orgemont Jossigny retained until its sale on June 25, 1574, to Robert Jacques, citizen of Paris. By the play of alliances, Jossigny now remain in the same family until the death of Baron Guy de Roig in 1975. She entered at the end of the sixteenth century in the lap of an important noble family of Parisian dress the Bragelongue, by the marriage of Robert Beard, daughter of Jacques, with Jacques Bragelongue of the king's counselor and regular master of his room account. Jossigny passed at the beginning of the eighteenth in the hands of another Parisian dress of family, no less honorable, but more modest, the Leconte of gravels, by the marriage of Anne-Françoise de Bragelongue with Augustin Leconte, Lord of Gravel, adviser the king at the court of aids, February 25, 1704. on the death of Anne-Françoise in 1734, the area of ​​Jossigny returned to their eldest son, Claude-François, whereas Augustine kept in usufruct until he died in Paris in March 1752. it is precisely at this time that was considered the reconstruction of the castle of the seventeenth century.

How To Get To Château de Jossigny (Map):