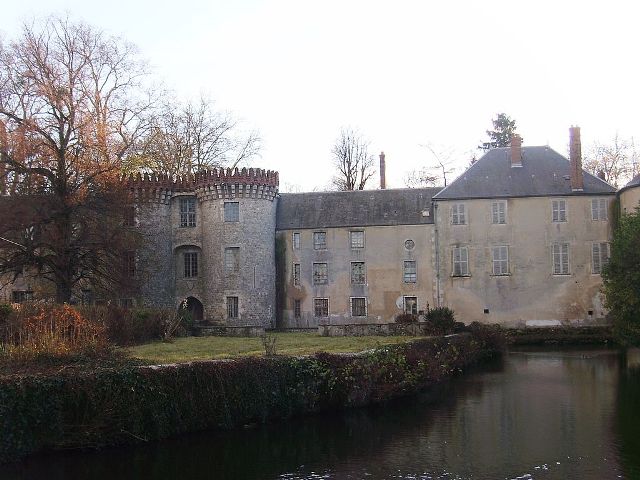 Location: Milly-la-Forêt, in the Essonne departement of France (Ile-de-France Region).
Built: 13th century.
Condition: In good condition.
Ownership / Access: Privately owned.
ISMH Reference Number: PA91000004
Notes: Château de Milly-la-Forêt is a French castle in the French town of Milly-la-Forêt, in the former province of Gâtinais, today the department of Essonne and the region Île-de-France, to fifty-one kilometers southeast of Paris.Built in the nineteenth century by the lords of Mailly, the castle was destroyed during the English siege in 1432. In the late fifteenth century to 1475, owned by the Admiral Louis Malet Graville, it was rebuilt and enlarged. What was then the dungeon became the gatehouse, the drawbridge was replaced by a permanent stone bridge and a gate closing the access between the north tower defense and the governor's house. A courtyard was surrounded wall and offered the center a chapel dedicated to Saint Valentine. The south walls were cut down to make room for flower beds and canals fed by the diversion of the river. The castle was successively the property of Hugh III Bouville of Olivier de Clisson, Jean II de Montmorency, Jean-François Faudoas Averton, Marc-Antoine Beaupoil Front St. Aulaire and Pierre Marie Lau Allemans. In the nineteenth century, the gatehouse towers were embellished with battlements brick and a slender roof. In 1859 the bridge was rebuilt in the Horn near the laundry of the castle that served as drinking trough for animals. At the end of the twentieth century were demolished mills on the course of the river. In 1964 was restored washhouse Bonde downstream of the river that was part of the field. On 20 December 1972 the castle was partly listed building. The park was identified to him in 1991 for his fences, canals and alleys.