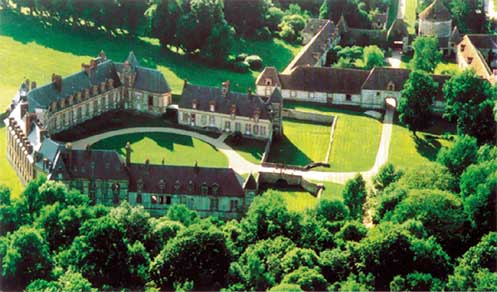 Location: Gambais, in the Yvelines departement of France (Ile-de-France Region).
Built: 16th century.
Condition: In good condition.
Ownership / Access: Privately owned.
ISMH Reference Number: PA00087438
Notes: Château de Neuville is located Gambais in the Yvelines department. Neuville Castle of Henri III style brick and stone, built in the sixteenth century by Joachim of Bellengreville, Prévot Grand Hotel du Roy in charge of security and police of the Court under Henry IV. In the twentieth century, the castle was occupied by German and American armies and gradually abandoned. It was only in 1966 what business a long and deep restoration that continues today. The castle, the farm and the whole area of ​​Neuville was a historical monument in 1972. The domain Neuville today includes an enclosed wooded park of 110 hectares with a pond surrounded wall of giant rhododendrons and a quadrilateral farm built between 1701 and 1702. Still inhabited by the family, the castle of Neuville is occasionally rented today for weddings, receptions and film shootings. For example, he recently served as the backdrop to the filming of the TV show The Best pastry.

How To Get To Château de Neuville (Map):