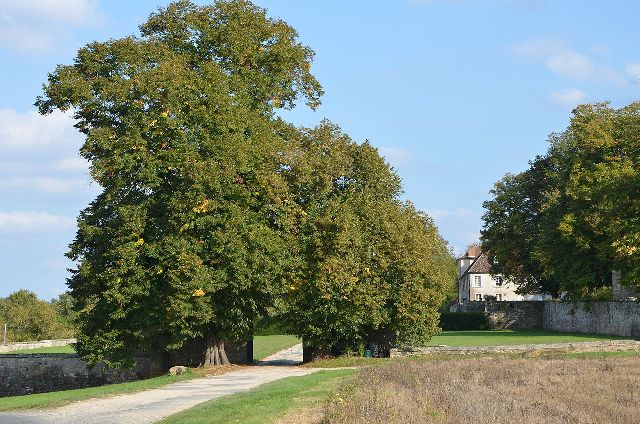 Location: Villecerf, in the Seine-et-Marne departement of France (Ile-de-France Region).
Built: 16th-17th century.
Condition: Ruins.
Ownership / Access: Privately owned.
ISMH Reference Number: PA00087319
Notes: Château de Saint-Ange de Villecerf (Seine-et-Marne in France) is built from 1543 the name of sour Châteauneuf Challeau by Pisseleu Anne, Duchess of Etampes on a grip of Beaumont-les-stronghold Challeau acquired by Francis I 10 years ago to the Groing, lords of Challeau. This "pleasure house built to modern" in the words of Chatillon who gave a first engraving is cited as one of the "most excellent buildings of France" by Jacques Androuet Hoop, which publishes drawings and comments.Built in the Italian style, in a style similar to the old castle of La Muette de Saint-Germain-en-Laye, this castle was flat roofs stone liais. He opened, first in the history of construction in France directly on four garden sides, honor gardens are those of the North, future water gardens, those in the south dominated the building, the whole being organized by compartmented terraces with retaining walls that cut up the elevation of the hill, to the shores of Orvanne. Passed in 1607 and 1609 the heirs of Anne of Pisseleu Antoine Charron, Baron de Dormelles, it was rebuilt by his younger brother François Charron who inherits in 1624, and given it by Louis XIII in 1628 the name of St. angel remained since. Challeau-Sant'Angelo to twelve km of Fontainebleau, was one of the appointments the most popular fighter of the time, thanks to the abundance of deer that were taken there. With Francis Charron and his eldest son Francis II, the area has changed considerably in its decoration: monumental entrance gate, water gardens, forest transformed into leisure park over 200 acres, rhythmic alleys and against sidewalks, roundabouts and factories, preceded lace boxwood gardens and yew, called bowers gardens, which were south symmetry with water northern gardens that use of elevation terrain to the number of jets of water supply in the basin, the center of the largest of which sailed a galley.