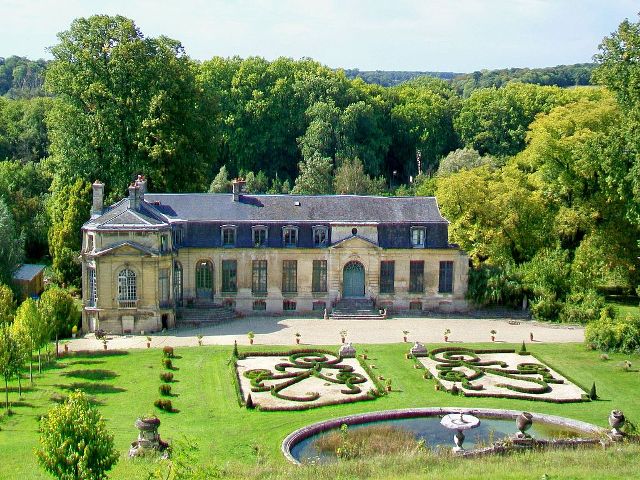 Location: L'Isle-Adam, in the Val-d'Oise departement of France (Ile-de-France Region).
Built: 18th-19th century.
Condition: In good condition.
Ownership / Access: Privately owned.
ISMH Reference Number: PA95000008
Notes: Château de Stors is a French castle of the eighteenth century in the Stors hamlet in the municipality of L'Isle-Adam in the Val-d'Oise department and Île-de-France, on the slopes of the Oise valley (left bank). The estate, which covers the municipalities of L'Isle-Adam and Meriel, is included in the classified site of the Chauvry valley. In the nineteenth century, it extended even to the other side of the river, the garden located on the territory of what is now the town of Butry-sur-Oise. Built in the early eighteenth century and embellished by Pierre Contant d'Ivry to the Prince de Conti, the castle was severely damaged by bombing during World War II. In 1944 Allied bombing destroyed the north wing of the castle and the farm that was on the field. Looted and vandalized in 1983, the castle gradually fell into disrepair. It is threatened with demolition in the 1990s The remains of the building and part of the park were bought in 1999 by a couple of enthusiasts. In 2001, terraces, kiosks, and pelvis are registered in the inventory of Historical Monuments. Stors is currently being restored. Some scenes of the film The Aristos, directed by Charlotte de Turckheim, were filmed at Castle Stors (2006).

How To Get To Château de Stors (Map):