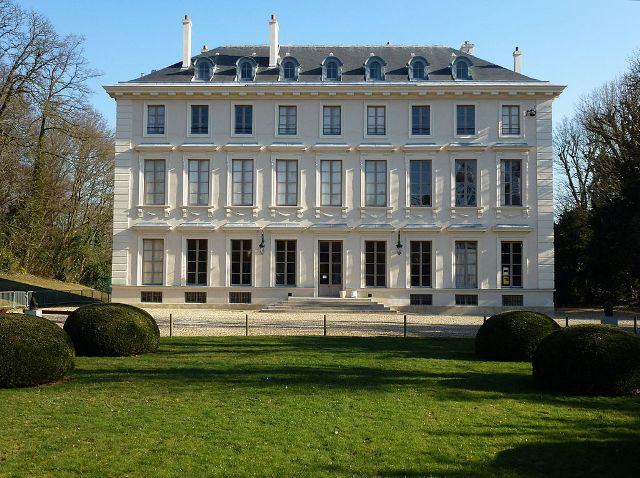 Location: Ville-d'Avray, in the Hauts-de-Seine departement of France (Ile-de-France Region).
Built: 1776.
Condition: In good condition.
Ownership / Access: --
Notes: Château de Thierry is named after Marc-Antoine Thierry who built it in 1776 to make his home in Ville d'Avray. Originally, it included a cottage, a firm, common and stables. The park was decorated with numerous factories.Marc-Antoine Thierry, first valet of King Louis XVI, shaved the old manor house of La Brosse to build a large house in 1776 by architect Joseph-Elie-Michel Le Fevre. Louis XVI gives him the lordship of Ville d'Avray in 1783. Thierry died September 2, 1792 massacre victim of the Revolution. His widow, Marguerite Cécile Lemoine Boullongne (1734 - 1813), and children unmade the castle in 1796. In 1854 he was bought by Paul Cocteau (1798-1865), notary in Paris and mayor of Melun, grandfather of Jean Cocteau. He sold part of the land to the side of the hill, Yvelin Baron de Beville. Leased apartments, the castle had several tenants including Jean-Baptiste Freville says the Twenty (1777 - 1860), Mayor of Sevres in 1848 and vice president of the General Council of Seine-et-Oise. In 1871, the castle becomes the property of Mrs. Paul Lelong, widow of the architect of the Bank of France. At his death in 1895, returns to the field Baston Ferdinand, Count of Lariboisière (1856 - 1931) who sells Felix Laroche, Suez Canal engineer. The castle was converted into a military hospital during the First World War and occupied by German troops during the second. In 1969, the town bought the castle, threatened with demolition, and the rest of its fleet. The castle is open to cultural and official activities, exhibitions, city council meetings, concerts, music classes, etc. The castle is the subject of a registration as a historic monument since July 30, 1973.