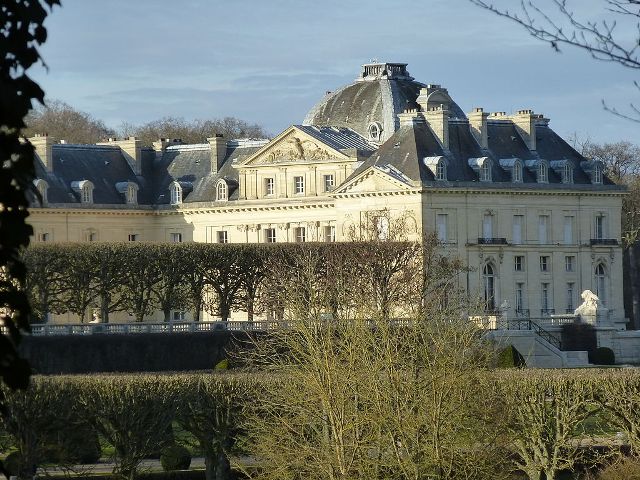 Location: Saint-Hilarion, in the Yvelines departement of France (Ile-de-France Region).
Built: 20th century.
Condition: In good condition.
Ownership / Access: Privately owned.
ISMH Reference Number: PA00087631
Notes: Château de Voisins is a castle built between 1903 and 1906 in Saint-Hilarion, Yvelines, by the architect René Sergent and landscape designer Achille Duchêne. At this location, was, in the fourteenth century a simple house in the heart of a small area. Sergeant-client glitzy created there a dream style, a sort of ideal eighteenth, we will call the "style Louis XVII". The layout of the gardens, outbuildings, water features, was executed from 1903 to 1929, in four rounds of two years each; it is due to landscape Henri and Achille Duchêne1; the parc4,1 presented an important series of decorative outdoor sculptures including ancient copies of statues by - or attributed to - Giambologna, Caffieri, Girardon, Guerin, Clodion, Popineau, Gabriel vessels and castings old polls by Jules Visseaux and modern works of Georges Gardet, Landowski, Lejeune, is a garden masterpiece to the French, which some experts consider more successful than Versailles. This unique set is one of the most accomplished creations of classical architecture School before World War II and one of the last castles built in France, with the castle of Artigny, built for the perfumer François Coty in Montbazon, and Castle Trévarez, built in 1907 for James Earl of Kerjégu in Saint-Goazec (Finistère).

How To Get To Château de Voisins (Map):