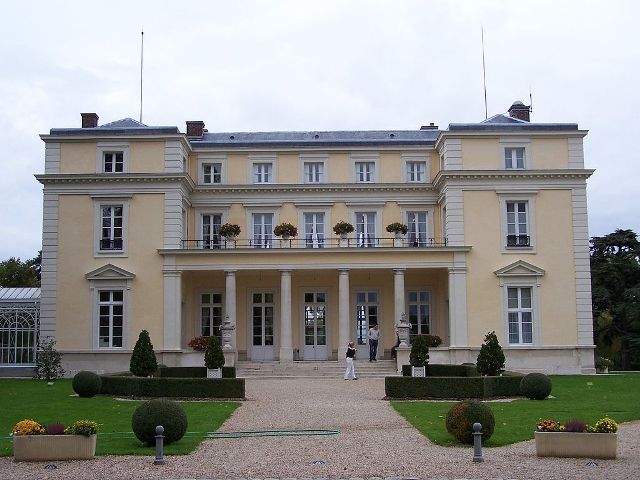 Location: Louveciennes, in the Yvelines departement of France (Ile-de-France Region).
Built: 19th century.
Condition: In good condition.
Ownership / Access: Owned by a private company.
ISMH Reference Number: PA00087814
Notes: Château de Voisins is a castle located in Louveciennes, in the Yvelines (France).The castle was built between 1650 and 1675. In 1696 it was bought by Louis Oger of Cavoye then became the property of Louise Elisabeth de Bourbon-Condé, Conti princess. 1820, noting its age, its owner, the Earl of Hocquart Turtot fact demolish and reconstruct; the building configuration is then that of today. In 1857 the estate was bought by Charles Tavernier: it is built in 1858 the neighbors lodge, it does surround a garden located along the path of Prunay; in 1874, he entrusted the keys of the field Jules Beer, which allowed the enjoyment of his son, William Beer. When the latter died in 1913, his wife Elena sharing the field, and reserves the pavilion sold the castle and its grounds to his uncle, Robert de Rothschild. Since 1946, the area is the property of BNP Paribas, which uses it as a training center.The castle is the subject of a registration as a historic monument since February 10, 1948.