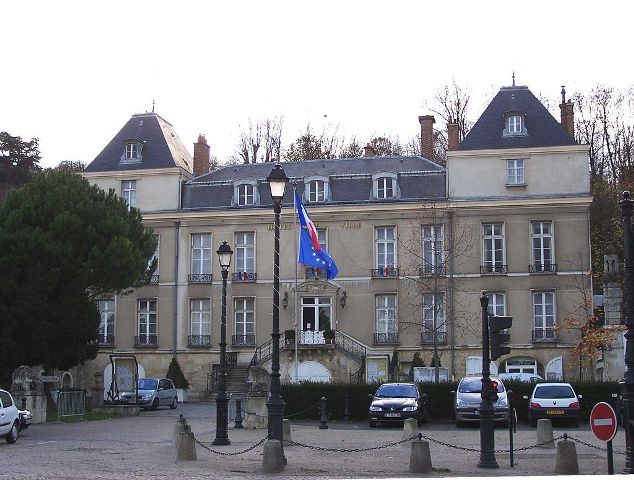 Location: Le Port-Marly, in the Yvelines departement of France (Ile-de-France Region).
Built: 17th century.
Condition: In good condition.
Ownership / Access: Owned by the town.
ISMH Reference Number: PA00087574
Notes: Château des Lions is located in the town of Port-Marly, in the Yvelines department. The castle is the subject of a filing and registration as a historic monument since April 27, 1972.The Lions Castle is a former lords of Prunay, rebuilt in 1806. At that time the owner was Bezuchet, who sold it later to the Marquis de Ferreti in 1824? The castle passed in 1835 to Mr. Brunet and Mr. de Villebresme in 1837. It was surrounded by a 17 hectare park. Henry Rodrigues-Henriques, Mayor of Change Agents in the street of Paris, settled in Lions castle in 1853. The castle passed in 1858 to his son Georges Rodrigues-Henriques, a stockbroker in Paris, and his wife Lucie ETIGNARD La Faulotte. They received the painter Camille Corot who performed in 1872 several famous paintings - "The Turn of the Seine", the "Watch", the "Walk to the Castle of Lions". Their daughter Jeanne, wife of Jean Roland-Gosselin, built in the castle park a chalet they called Cubs and she held with her husband and four children.Family Rodrigues-Henriques kept the Lions castle until 1926.Bought in 1953 by the Municipality of Port-Marly, it hosts since 1971 the City Hall.

How To Get To Château des Lions (Map):