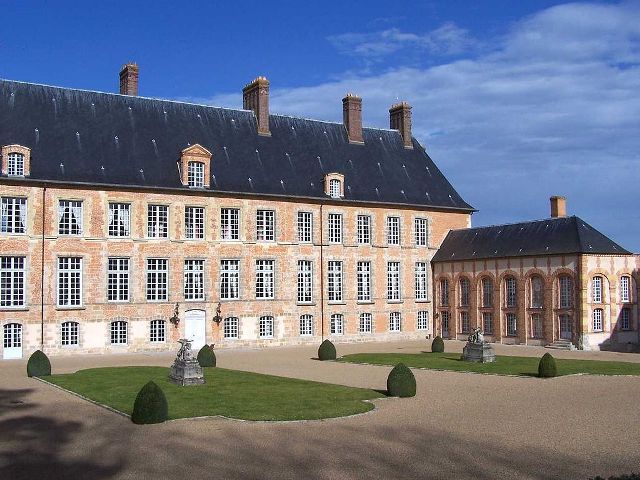 Location: Les Mesnuls, in the Yvelines departement of France (Ile-de-France Region).
Built: 1731.
Condition: In good condition.
Ownership / Access: Privately owned.
ISMH Reference Number: PA00087537
Notes: Château des Mesnuls is a Louis XIII style castle built of stone and brick, located in the town of Mesnuls in Yvelines in France. The large residence and its grounds, first bought by the company Thomson (1987) then belonged to Thales.The castle was developed to suit the fancy of fortune - or misfortune - of its successive owners. In 1230 began the construction of a first mansion which nothing remains under the aegis of Ernaut of Aurora, which is followed by Jehan Gautier, Robert Duport, Jehan Dumor, in 1460 Simon de Maintenon, Jehan Niard in 1480 Pierre Chapillard. The years 1535-1540 saw the construction of a two-level building with a low wing and a postern two turrets (current main entrance of the castle) and digging moats by Christophe Refuge, butler of the Duke Alençon. In 1556 he qualified a hundred gentildhommes of Henri II House; he had a son named Charles. In 1575 the castle was acquired by Robert Combault, a gentleman of the king's chamber and captain of the guards of the Queen and his wife, Louise lady Béraudière. In 1578 he obtained royal letters patent granting "high, medium and low justice" on his land, and from 1580 had built the left side of the central main building. At his death in 1606 the estate was acquired by Bernard Begnins, notary and secretary of Henry IV; it controls the right side of the main building and increases the area by land purchases. On 4 June 1620 the young Louis XIII came Mesnuls dinner. In 1637 the estate was sold to a cousin, Achilles Courtin, master of Louis XIII requests, and his wife, Jeanne Barentin; Achilles Courtin obtained from the king the erection of the lordship of county Mesnuls.But it is from the eighteenth century that knows its most famous owners.

How To Get To Château des Mesnuls (Map):