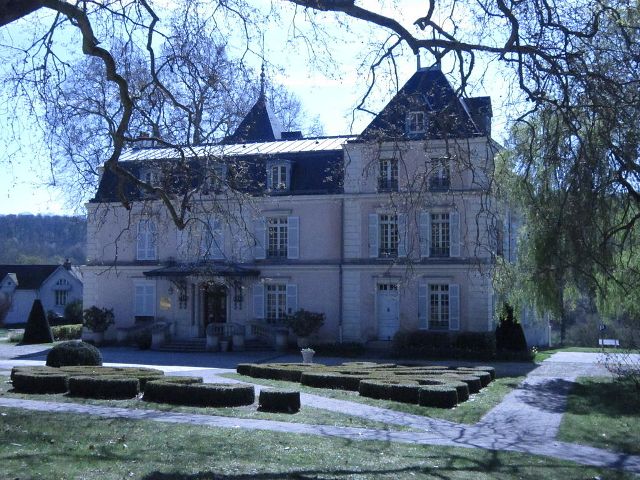 Location: Bièvres, in the Essonne departement of France (Ile-de-France Region).
Built: --
Condition: In good condition.
Ownership / Access: --
Notes: Château des Roches is a French castle in the town of Bièvres, in the former province of Hurepoix, today the department of Essonne and the region Île-de-France, fifteen kilometers southwest of Paris . The castle consists of a main body millstone and limestone plaster, three stories high on a U-shaped basement The north wing is drilled to the south by two windows and a window opening onto a terrace, surmounted with an attic floor under a slate roof and zinc, the west wing closer has three levels, the last attic and crowned at the southern end by a raised square tower with a weather vane at the second level a terrace surrounded by a balustrade is installed above the advancing ground floor. The west wing, the last added is pierced six windows on three levels to the west and to the east and to the south end window, the facade is topped by a triangular pediment. The lobby is lit by a skylight and topped with a mezzanine accessible by double staircase, lounges and a library restored in the Romantic style. The park of the castle is decorated with lace near the entrance, garden factories and two artificial lakes obtained by diversion of the river Bievre flowing south of the park. He made the study of a census under the remarkable gardens.

How To Get To Château des Roches (Map):