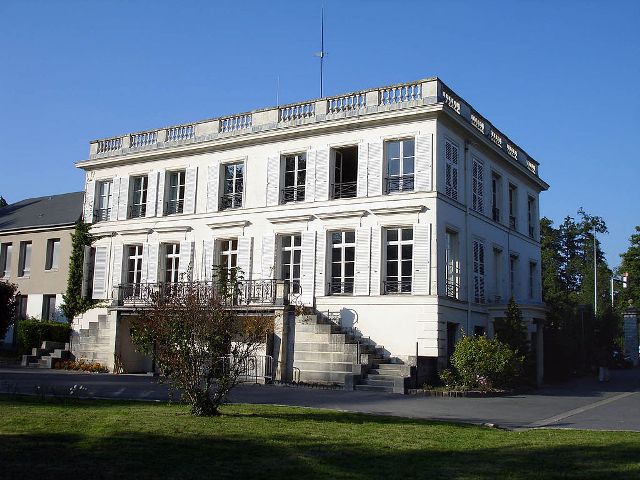 Location: Margency, in the Val-d'Oise departement of France (Ile-de-France Region).
Built: 1834.
Condition: In good condition.
Ownership / Access: --
Notes: Château du Grand-Bury is a house of the nineteenth century, commanded by Pierre Tattet. It is located in Margency Val-d'Oise.Tattet the family acquired the estate in 1822. The castle was built in 1834 by a famous architect Louis Visconti, who in the valley of Montmorency has many white rectangular houses with flat roofs with balusters. The area of ​​the park was designed by Jean-Pierre Barillet-Deschamps, the landscape of the Bois de Boulogne. Around 1830, a literate society frequented the Grand-Bury, grouped around the "three Alfred" Alfred Tattet, Alfred Leroux (brother of the previous owner and the domain Maugarny in the vicinity), and Alfred de Musset. Life in Bury was then made of pool parties, horse races, swimming in the Oise or in the lake on the property. Bury was one of the homes of Musset, who received George Sand. " Well ! I left Paris this annoying that I love. I've been to Bury. I saw the woods that I loved so much, there are two. I watered greenery, we took the beer garden and played the lottery: what do you want more innocent? "Musset wrote to his brother. In 1939, the property owner hired Bury the Marist Fathers of St. Mary's College of Sierck-les-Bains in the Moselle. These were fleeing the combat zone and looking for a home for their students. The property was finally sold to the Marist Fathers in 1943.