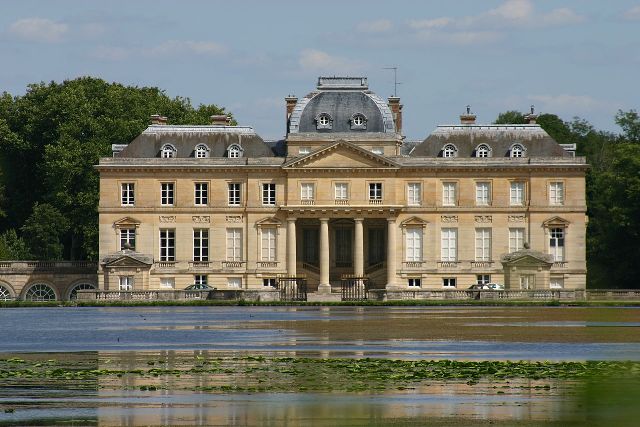 Location: Le Val-Saint-Germain, in the Essonne departement of France (Ile-de-France Region).
Built: 1772.
Condition: In good condition.
Ownership / Access: Privately owned.
ISMH Reference Number: PA00088024
Notes: Château du Marais is a French castle in the town of Val-Saint-Germain, near Saint-Cheron, in the former province of Hurepoix, today the department of Essonne and the region Ile-de- France, thirty-six kilometers southwest of Paris. Built by architect Jean-Benoît Vincent Barré for Master Jean de La Martinière, General Treasurer of the Artillery and Engineers, it is considered one of the most remarkable examples of Louis XVI style castle near Paris. It belonged successively to noble families such as Noailles, Castellane, Talleyrand-Perigord and Pourtalès.In the nineteenth century, the monks of the abbey of Vaux-de-Cernay, had cleared forests and drained the marshes. The first lord of the place was Jean de Saint-Germain in 1282. The family of Saint-Germain was allied to the family of Saint-Yon. An act of 1397 mentions a feudal manor of which we know nothing. In the fifteenth century the two lordships belonged to the same family; when Antoine Vigeais inherited his father John, the houses were in ruins, the farmers had disappeared; he restored order in the area and built the largest castle Marais. An inventory from 1507 describes a small building that was purchased in 1516 by Jean Huraults, counselor to the parliament of Paris, which made him grow and he planted the park; the area remained in that family until 1706. 1620 was built the third castle of which there remains only common, today transformed into a museum. In the early eighteenth century, the estate was acquired by Pierre Henry Lemaître, who performs major repairs, probably using his architect, François Debias-Aubry. September 5, 1767, his heirs sold it for more than six hundred thousand pounds to Master Jean de La Martinière, Treasurer General of Artillery and Engineering from 1758 to 1774, greatly enriched "in the trade of paintings with Flanders" . The purchase deed says "The land of the Marsh has a beautiful castle built in the modern composed of a large main building between court and garden. "But, Master shaved the building in 1772 to build a new castle by architect Jean-Benoît Vincent Barré, work performed between 1772 and 1779; it is said that "to be sure to have the new" the new owner went so far as to destroy the materials from the demolition of the old house. The importance of work, spent considerable sums, pomp construction stunned contemporaries, such as the Marquis de Bombelles who noted in his diary: "A man who all his life, had remained in the middle of a large fortune, extremely modest, was suddenly let go in building a castle that could be enough for a prince of royal blood. Barrés'est captured the confidence of Mr. Master and raised her buildings whose expense goes, it is said, than the sum of two million. " Among other modern furniture of great value, La Martinière are placed convenient to a rare Chinese-inspired decor stamped by Roger Vandercruse said Lacroix and Jean-Baptiste Leleu, who was sold 4,215,500 francs in Paris on 17 June 1994 she appeared in his inventory after his death in April 1783 and remained there until the following century. His niece Adelaide Prévost (1755-1844) by his marriage M La Briche, only became owner of the estate in 1785 after negotiations with the heirs, and it receives writers and politicians.

How To Get To Château du Marais (Map):