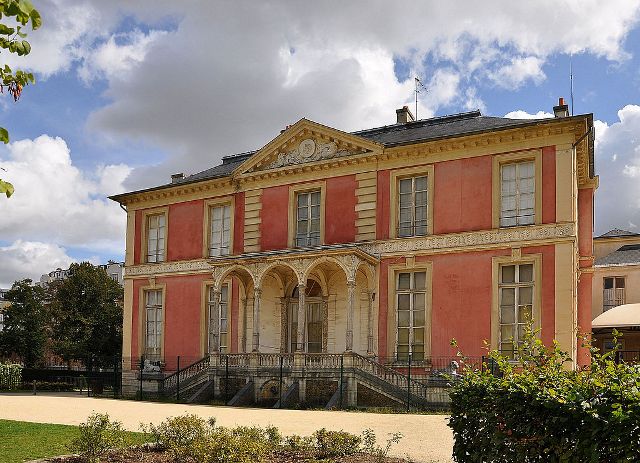 Location: Neuilly-sur-Seine, in the Hauts-de-Seine departement of France (Ile-de-France Region).
Built: 1638-1777.
Condition: In good condition.
Ownership / Access: --
Notes: Folie Saint-James is a mansion in Neuilly-sur-Seine, Hauts-de-Seine, France, which belonged to Claude Baudard of Vaudésir of Sainte-Gemmes, Baron of St. James, Comptroller General of the Navy Louis XV. He built and fit in 1777 by François-Joseph Bélanger a house and luxuriously decorated area factories and planted trees Want called "madness" in Neuilly-sur-Seine near Paris.Madness and its park are the subject of a classification as historical monuments since 1922.In the eighteenth century, the Madrid castle in Neuilly-sur-Seine was in ruins. Another house, a house of classic-looking master shaped horseshoe, was built in 1638 along the wall of the castle: the area of ​​the House. In 1772, Claude Baudard of Vaudésir, Baron of St. James and rich financier, bought that field. Neuilly was at the campaign. In 1777, Count of Artois, future Charles X of France, built a folly in the Bois de Boulogne neighbor by François-Joseph Bélanger. Bélanger was the first architect of the count and one of the greatest landscape painters of his time. Baron St. James then asked Bélanger to build him a madness in order to compete with the madness of Artois. Bélanger added to the master left corner of the home of a large pavilion with Palladian lines, brick and stone. Demand for St. James the architect was: "Do what you want provided it is expensive. ". The mansion area of ​​the House was preserved and converted into common.

How To Get To Folie Saint-James (Map):