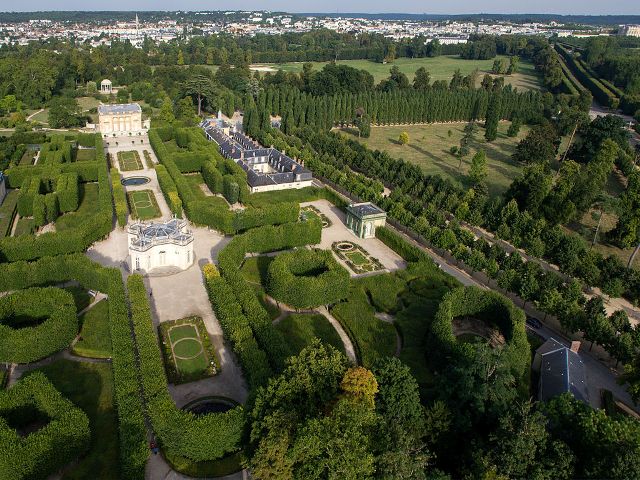 Location: Versailles, in the Yvelines departement of France (Ile-de-France Region).
Built: --
Condition: In good condition.
Ownership / Access: --
Notes: Petit Trianon is an area of ​​the castle of Versailles, near Paris, France, with a small castle surrounded by gardens of various styles. In meadows and groves east of the Grand Trianon, Louis XV, at the instigation of Madame de Pompadour, entrusted in 1748 to Claude Richard, assisted ten years later Bernard Jussieu, the development of a " plant garden "reflecting his passionate interest for botanical experiments. The architect Gabriel adorns a French garden and a menagerie for ordinary animals, unlike the nearby Royal Menagerie, more exotic, Louis XIV. It also builds amidst verdant fairways two factories leisure and relaxation, the French Pavilion Lounge and fresh. In 1762, the King asked his prime architect to build a castle of a new kind, which provides a view of the various gardens. Recognized as an architectural masterpiece of the emerging neo-classicism, the building of square plan, clean and simple, with four facades decorated with the Corinthian order, combines the talents of Gabriel, the sculptor Guibert and decorators bring within the last taste more refined than rich, in which a special place is reserved for nature and rural atmosphere. The ground floor is dedicated to the service, the "noble floor" includes reception rooms with three rooms entresolées to the Queen's use and the attic is formed "apartments of lords." The Countess Du Barry, who succeeded as mistress of Louis XV to the Marquise de Pompadour, inaugurated the castle in 1769. On the death of his grandfather, Louis XVI offers the Petit Trianon to his young wife Marie Antoinette, creating a personal and intimate universe, far from the pomp of the court. She erected a theater company, then sacrifices botany and made arrange an English garden, in contrast to the monotony of the rest of the park. Richard Mique erected several factories between 1777 and 1782 in the aisles of contours and a meandering river: a temple dedicated to Love, an "alpine garden" with its gazebo and a ring game. In a more rustic style, a hamlet of approval completes the set, according to Rousseau inspired the painter Hubert Robert. Trianon is the part of the Versailles estate that suffers most of the French Revolution, the castle was empty of furniture, before being transformed into an inn, the gardens are transformed into public ball park factories were looted or left to the abandonment.The field course takes its name from the ancient village of Trianon, acquired in 1668 by Louis XIV with the proposed inclusion in the castle of Versailles. In parallel with the Trianon of marble, built in 1687, the place was first called the Menagerie of Trianon or Trianon Hermitage, before that custom attributes to it its final name of Petit Trianon in 1759.