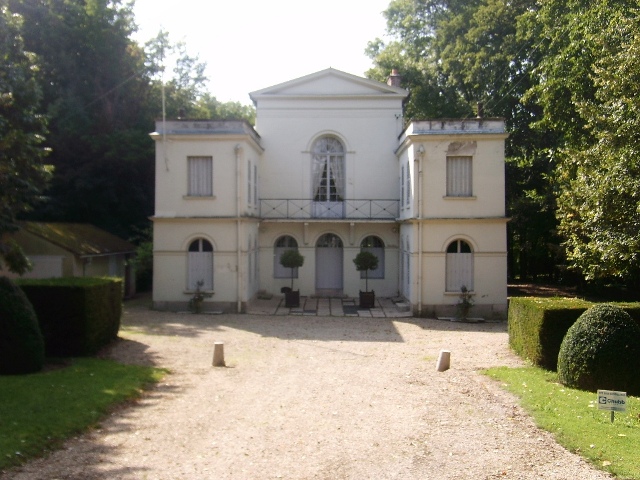 Location: Orsay, in the Essonne departement of France (Ile-de-France Region).
Built: 18th century.
Condition: In good condition.
Ownership / Access: --
Notes: Temple de la Gloire is located in Folie the French town of Orsay, in the former province of Hurepoix, today in the department of Essonne and the Ile-de-France region. The Hall of Fame is built in sandstone; it takes the form of an ancient temple. The building has a ground floor and a raised main floor; the eastern side presents a façade topped by a triangular pediment; a wrought iron railing that office to the balcony of the first floor, accessible by a glass wall; two short wings symmetrical two-span plane form a "U". The western facade, built in the axis of the channel about thirty meters from the end preceded by an outdoor theater that overlooks; it is pierced by three tall windows and two windows on the two symmetrical side portions but not original - such as those that surround the arc arched door in the middle of the first level, forming base - because they appear not on old photographic documents posted online. It contains forward-body a peristyle of four columns with Ionic capitals; two side stairs two flights without balustrade gives access to the park, giving it a Palladian villa of appearance; this structure is that - among other buildings of this style - the front garden (with "loggia" and central colonnaded Doric capitals and ionic) of the Deux-Sèvres prefecture hotel in Niort (79) built from 1826 to 1830 by Pierre-Théophile Segrétain. The interior features the first floor lounge or square ceremonial room for main room, opening like the piano nobile Venetian on both fronts (available in France called "lantern", offering a "through-view"); each side in advanced are a boudoir and a smoking room with a bathroom serving bedroom. The ground floor of the park is equipped with a dining room, a kitchen and an office, probably created by Mosley. The park, reduced to 1.5 hectares today, consists of a wooded area forming a green theater and a vast lake, the whole being enclosed in wrought iron.