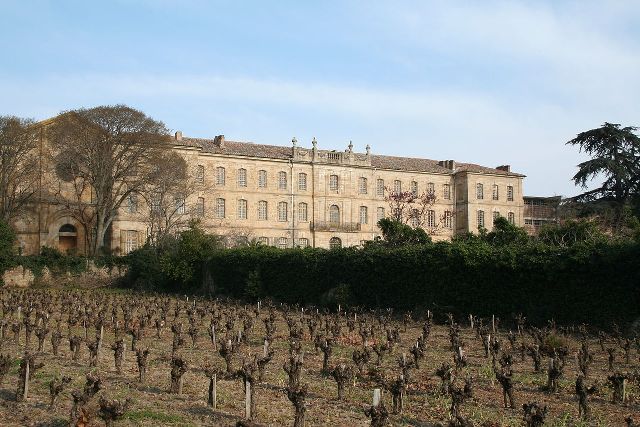 Location: Roujan, in the Pyrenees-Orientales departement of France (Languedoc-Roussillon Region).
Built: 18th century.
Condition: In good condition.
Ownership / Access: Owned by a private company.
ISMH Reference Number: PA00103685
Notes: Abbaye de Cassan also called abbey of Cassan Cassan or castle, was built in the eighteenth century classified as historical monuments. It is located in the municipality of Roujan, in the department of Herault.In 1080, founded a priory is thanks to a donation of land made by the Alquier family, powerful family of the Béziers area, a few canons who left in 1066 to the chapter of the cathedral of Saint Nazaire Beziers. The second prior, Guiraud (1070-1123) will give the monastery its reputation. Under his leadership, the reputation of the place attracts donations of the aristocracy of the whole region. The rule followed is that of St. Augustine and the members of the priory are canons. Their number will rise to eighties. A new priory church was consecrated on October 6th 1115. Many relics enhance the reputation of the priory (one of four Saints Shrouds of Christ known in the West, the relics of the Holy Sepulchre, crown of thorns, of St. Martha ...) . This place will serve as a cemetery for nobility of Beziers and the entire region. Donations tributary, heritage spans seventy-six towns, the priory was undergoing one of its most glorious periods. The thirteenth century marks a turning point for the priory. Pope Innocent III, the cause of the crusade against the Cathars, promulgates an exemption bubble against the Conventual Priory of Cassan, submitting it directly to the Holy See; Priory and escape the jurisdiction of the bishops of Béziers; in the spiritual realm it is accountable only to the pope in Rome. At the temporal level, the canons give the King of France Louis IX for overlord in 1268, hence the name of royal priory. In the fourteenth century, the Black Death and the Hundred Years War hit hard the priory; the monastery was fortified to protect the road misdeeds community; in 1384, it remains only forty canons. Religious wars will exacerbate the difficulties. In 1539 and again in 1563, the Protestant troops with their head Crussol Jacques and Claude de Caylus (Lord of Faugères) burned and looted the monastery. The decline began in the fourteenth century continues in the following centuries; in 1605 the priory no longer hosts seven or eight canons. In 1671 the priory is attached to the abbey of Sainte-Geneviève Paris. In the second half of the eighteenth century, the commendatory prior Beaulieu No rebuilt the monastery. The medieval buildings are razed to the ground and rebuilt in the style of the time. The sumptuous palace convent would be the work of a member of the family Giral, which counted several architects in Montpellier. The church has a modified head, but for the rest it is thankfully redesigned, making it the only architectural witness of the Romanesque monastery built by St Guiraud at the beginning of the twelfth century.In 1995, Cassan back into the private domain and hosting a circus school. The castle was bought in 2002 by a real estate group that is developing there (March 2011) innovation programs for companies and aims to make a European center for prevention and research on the welfare to work. This project is led by Gabor Mester de Parajd, chief architect of historical monuments. The building and its surroundings are open to visitors and host various cultural events.

How To Get To Abbaye de Cassan (Map):