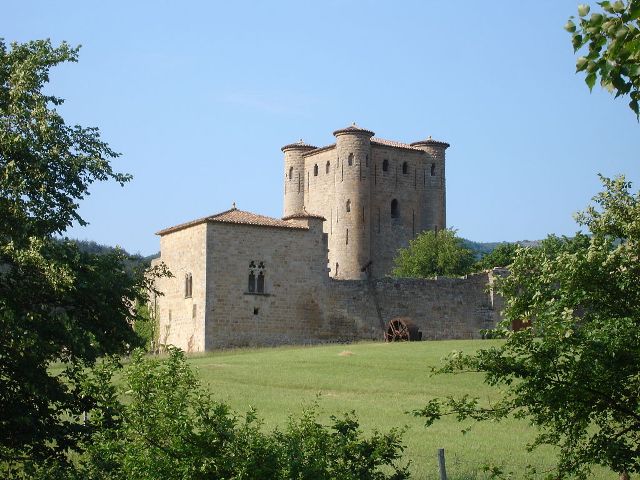 Location: Arques, in the Aude departement of France (Languedoc-Roussillon Region).
Built: 1280-1310.
Condition: In good condition.
Ownership / Access: Owned by the municipality.
ISMH Reference Number: PA00102539
Notes: Château d'Arques (Arcas in Occitan) is a former stronghold of the late thirteenth century, which stands on the town of Arques in the Aude department in Languedoc-Roussillon, Midi-Pyrenees.The castle is the subject of a classification as historical monuments by order of August 16, 1887.In the nineteenth century, a conflict between the Viscount of Carcassonne and lords many, including those Arques and Lagrasse. The lands of Arques become the property of the lords of terms. In 1217, Beranger d'Arques among the relatives of William of Peyrepertuse. In 1231, after the terms of the castle taken during the Albigensian crusade against Simon de Montfort IV tackles Arques. After burning the village (Villa Arquis), located on the banks of Rialsès he gives this part of Razès to one of his lieutenants, Pierre de Voisins. In 1284, Gilles de Voisins begins construction of the castle. It was to defend Rialsès Valley and voice control of transhumance that led to the Corbières. In 1316, Gilles II of Voisins said "Vest" reworked and completed the construction of the castle.In 1518, Françoise Neighbours, Neighbours last heiress, married Jean de Joyeuse which returns the barony of Arques. The castle was abandoned in favor of Couiza. In 1575, the castle was besieged by the Protestants and only the keep resisting the assault.From the Revolution, the castle fell into ruin. It is sold as national property and suffered some damage. After its ranking in 1887, then it is renovated and partially rebuilt and opened to visitors.The stronghold of Arques, although architecturally it has all the attributes of the castle tower mistress (keep), corner towers, curtain walls, fortified gate, etc., it does not have the status.The stronghold consists of an enclosure and a "high tower" square flanked by four turrets. It was built after the crusade against the Albigenses in the thirteenth century on the land data to Pierre de Voisins, a lieutenant of Simon de Montfort. The chamber almost square 51 × 55 meters identifies the castle with a gate adorned with a battlements atop a keystone of arms of the family of neighbors ( "Gules three gold flares in fess, accompanied chief of a label to four during the same "). Many buildings were to exist along the enclosure. Still well preserved two-dwelling towers. The square tower, 25 meters high, is a masterpiece of military architecture inspired Ile de France. It comprises 4 floors with a spiral staircase. The different rooms have been built with extreme care. The top floor was devoted to the defense of the castle. Forty soldiers could defend together this dungeon thanks to the many loopholes and rectangular windows that ajourent symmetrically walls. This is a good example of the progress of military constructions, now complex and learned, in a strategically sensitive area.

How To Get To Château d'Arques (Map):