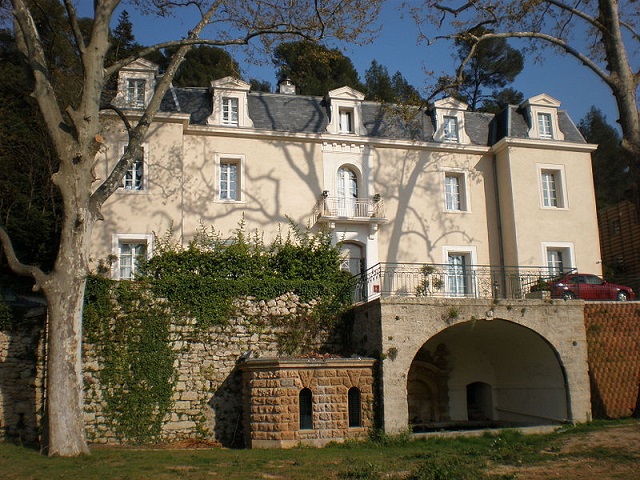 Location: Montpellier, in the Aude departement of France (Languedoc-Roussillon Region).
Built: 17th century.
Condition: --.
Ownership / Access: Commercial society.
Notes: The castle of Bionne, formerly castle of Mont-Louis, is a Montpellier madness of the late seventeenth century, modified in the nineteenth century. This building is located 1225, rue de Bionne, north-east of Montpellier, in the Hérault.The name of the castle of Mont-Louis appears for the first time in 1685, when it is owned by the powerful Nicolas de Lamoignon de Basville, "steward of justice, police and finance, commissioner departed for the execution of the king's orders in the Province of Languedoc ". The latter shelters there his adulterous connection with a friend of his wife, Gabrielle Pavée de Villevieille, otherwise wife of his lodging in Montpellier. All Montpellier is aware of this vaudeville. A pamphlet with keys of the time, titled The fairy tale of the Mount of the Pucelles, describes Madame d'Audessan under the name of "Minaudette" and the steward under that of "Sage Druide". In any case, the latter kept the castle until his return to the Court in 1718. The building then passes through various hands including that of the Bonniers, which also own the castle of Mosson and the castle of Alco. It is at this period that it takes the current name of castle of Bionne. A local legend tells us that Bonnier de la Mosson was using underground - found until today - to come to visit a young lady from Bionne. During the following century, the families of Pourtalès, Montpezat, Thibault, Tissié and finally Leenhardt, from which the historian Albert Leenhardt and the journalist Étienne Leenhardt, were born. It then becomes a summer camp center run by the association of Friends of the secular school, then the first IVG center of Montpellier. Today it is a castle-hotel. On April 3, 2010, the Poker Cup events took place.

How To Get To Château de Bionne (Map):