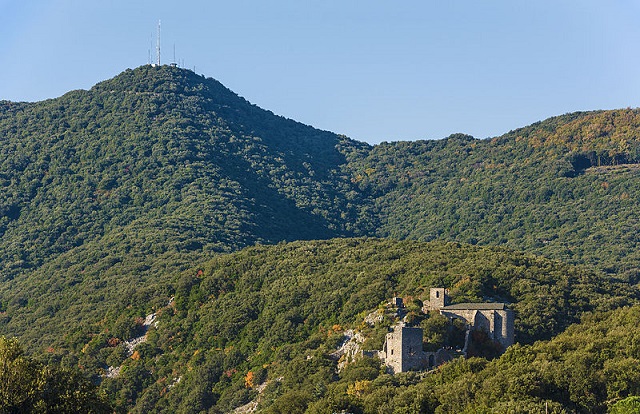 Location: Cabrerolles, in the Aude departement of France (Languedoc-Roussillon Region).
Built: 12th century.
Condition: --.
Ownership / Access: Commune of Cabrerolles.
Notes: The castle of Cabrerolles is a fortress of the twelfth century, dismantled in part during the wars of religion.This building, the object of restoration campaigns since 1990, features a fortified castle chapel. The ensemble dominates the village of Cabrerolles, in the department of Hérault.The keep of Cabrerolles is cited as early as 980. The site develops until becoming in the twelfth century the fortified ensemble visible today. His first lord mentioned is "Atracerius de Cabrairol". The rocky spur on which stands the fortress commands passage from the high valley of the Orb to the Biterroise plain. The building has two watch towers, one facing the mountain and the other facing the plain. In the upper part of the site, stands a fortified chapel built in a peak on the rock, and also constituting an element of active defense. Its bell tower and the north tower of the castle are one. The lordly lodging rises to the south and is accompanied by a small medieval habitat, all protected by a fortified enclosure. The wars of religion are fatal to the castle. In 1569, Baron de Faugères, one of the leaders of the Reformation, ordered to destroy the chapel (only part of the apse collapses). The Duke of Montmorency then attacked the walls. What remains is definitively dismantled in 1630, during the campaign of Richelieu for the eradication of the feudal strongholds. Restored in the seventeenth century, the chapel, placed under the invocation of Notre-Dame de La Roque, becomes the village church and is sold as a national property to the Revolution. Since 1990, the castle of Cabrerolles is the object of careful care, supported by the municipality and an active local association.

How To Get To Château de Cabrerolles (Map):