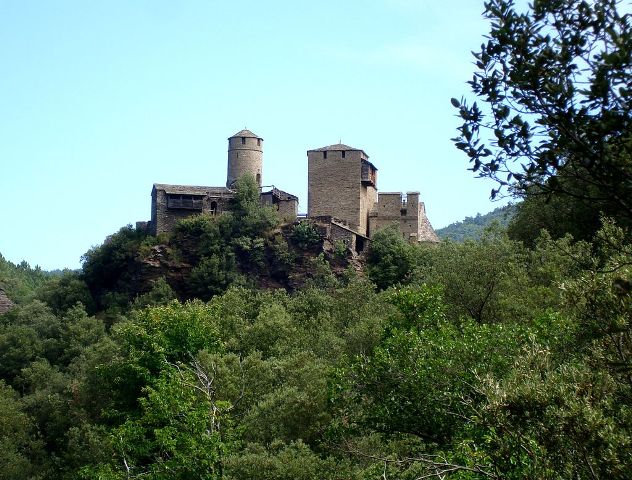 Location: Bédouès, in the Lozere departement of France (Languedoc-Roussillon Region).
Built: 11th-14th century.
Condition: In good condition.
Ownership / Access: Famille Darnas.
Notes: Château de Calberte is a castle located at Bédouès in the French department of Lozere.Now abandoned, the castle served as the film location scout always (1985) Gérard Jugnot.The castle consists of several buildings: The large square tower, 11m high, dates from the twelfth century. An older rectangular main building is attached to it. It has two levels, and in the fourteenth century have been added barricades, battlements and a gatehouse above the door. Four outbuildings, a round tower and a chapel complement it. A first small enclosure isolates the castle buildings from those of the medieval village below on the north side. The village itself is surrounded by a second enclosure which closes the whole. The main access is through the northeast door. The adjoining town consisted of fifteen houses (or a hundred inhabitants). The houses were searched had both levels (ground floor to the beasts floor for residents). They had roofs double covered flagstone slope. The streets had a stormwater drainage system. The excavations that were conducted there were able to determine that they essentially housed a metallurgical activity (slag homes available).