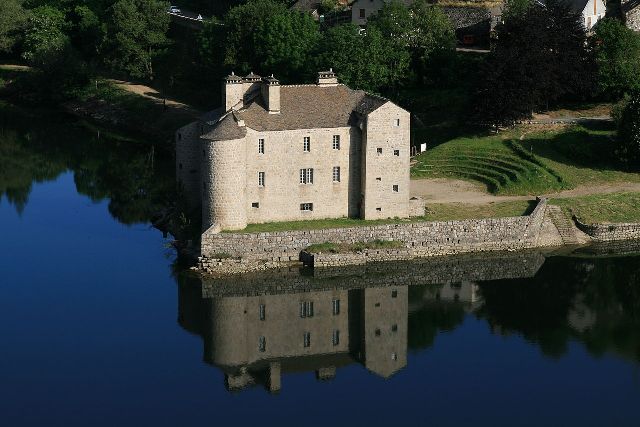 Location: Pourcharesses, in the Lozere departement of France (Languedoc-Roussillon Region).
Built: 15th century.
Condition: In good condition.
Ownership / Access: Communauté de Communes de Villefort.
Notes: Château de Castanet is a castle of the sixteenth century located Pourcharesses in Lozère, France.The establishment of the manse of Castanet dates back to the thirteenth century but may be older. It is located in the Saint-Victorin de Villefort, attached to the diocese of Uzes, but is dependent on the abbey of Saint-Gilles. At this time it is the Lord of Hérail, co-lord of the bet Garde-Guérin and vassal of the Bishop of Mende, which has the manse. Until 1550 the manse will be inherited, in addition to the prestigious right to bet the Garde-Guérin. It was Robert Brown who is owner of the manse from 1550. It will sell 14 December 1571 to Jacques Isarn Villefort.C'est of the latter who had built the following year the mansion of Castanet. It will be gradually enlarged or embellished by his descendants. The coat of arms created by Jacques Isarn is "Azure in chief a fess 3 besants and in base of a crescent, all Or" that adorns the fireplace. Around 1684, the castle is only a secondary place for the family of Isarn. Jacques Joseph Isarn, the heir, married Marie Suzanne Valicourt, better known as Villefort marquee name, sub-governess of the children of France from 1709 to 1744.En 1760, Jean-Louis Baldit, lawyer in Villefort , bought the castle in Louis-Francois Isarn. This also includes the yard, barn, stables, garden, mill, meadows and fields. It will sell in 1784 Victorin Bonnet-Ladevèze, Judge Villefort. After the French Revolution, it is still sold, this time as a national asset, to Theodore and Joseph André Borrely Villefort following the emigration of its former owner during the revolution.In 1932 it was Joseph Piton who bought the castle, which will become a family well into the 1960s, and the threat of destruction. Indeed, from the 1956-1957 study is built the dam Villefort that must drown a part of the valley whose castle. The registration of the castle in a historic monument in 1964, will keep his castle destruction.Le be entrusted by EDF municipal association Villefort Pourcharesses-Prévenchères. The monument therefore welcome art exhibitions until 1992. From 1993 to 1995 the castle will expose some of the first devices photo.En 1997, three associations will create exhibitions chronicling the daily lives of inhabitants of the territory during the 1900s -1950. A terrible fire devastate the castle in March 2000. After a restoration that will end in 2006, the castle will take guided tours and exhibitions organized by the Community of Communes.

How To Get To Château de Castanet (Map):