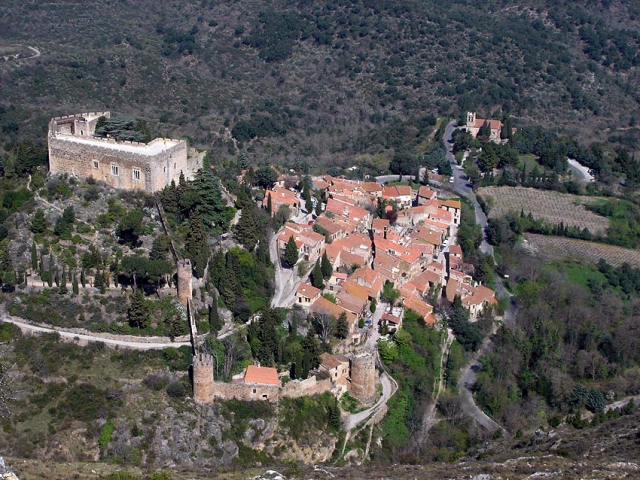 Location: Castelnou, in the Pyrenees-Orientales departement of France (Languedoc-Roussillon Region).
Built: 11th century.
Condition: In good condition.
Ownership / Access: Crédit agricole Sud-Méditerranée.
Notes: Château de Castelnou (castrum novum Novum Castellum or the "new castle" which became Castell Nou in Catalan) is a medieval castle in Castelnou in the Pyrenees-Orientales. He stayed for four centuries the residence of the Viscounts Castelnou.The castle is mentioned for the first time in 990; then it is the seat of power Count of Besalú in Vallespir. Ten years later it is the seat of a viscount, Besalú delegate count for the Vallespir. This Viscount William I, takes the title of Viscount Castelnou in 1018. His descendants resident in Castelnou until 1286. That year, the castle was stormed by the troops of Jacques II of Majorca during the crusade Aragon. The castle is returned to Viscount Jaspert V in 1299, by the Treaty of Argelès. In 1321, the death Jaspert the castle briefly to his daughter and heiress Sibil.la and after the death of the latter, the widow of Jaspert, Galcerande Narbonne, selling the King of Majorca. The latter gives way in turn to the family of Fenouillet, which itself sells to Bérenger Castelnou, last representative of the Viscount's family. Without heir, he sold the castle in the late fourteenth century to the family of Llupia, which keeps it until the eighteenth century. In 1483, Baron Castelnou rebels against the authority of Louis XI. The castle was besieged by the troops of the governor of Roussillon. During the seventeenth century and eighteenth century, the castle was abandoned. At the end of the nineteenth century the castle was bought and a restaurant - you can almost qualify reconstruction - was conducted.

How To Get To Château de Castelnou (Map):