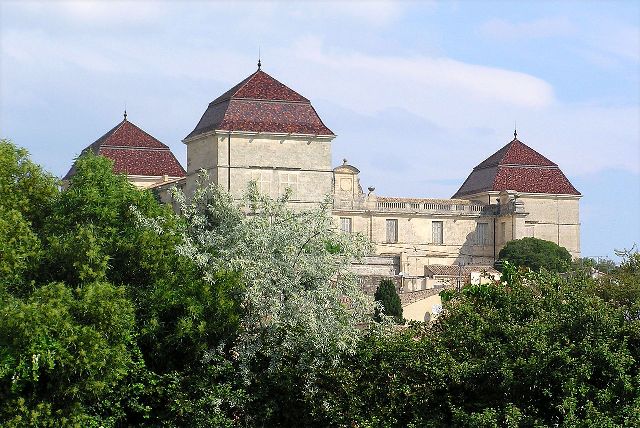 Location: Capestang, in the Hérault departement of France (Languedoc-Roussillon Region).
Built: 16th century.
Condition: In good condition.
Ownership / Access: Owned by a local authority.
ISMH Reference Number: PA00103410
Notes: Château de Castries was built in the seventeenth century built on medieval foundations. Classified as a historical monument, overlooking the city of Castries, near Montpellier, in Herault.The powerful lord Dalmace, crusader knight and first owner of Castries, is participating in the First Crusade and died in Palestine. The feud between Castries then by marriage and wills, in the heritage of Guilhem VII, Lord of Montpellier. The thirteenth and fourteenth centuries, the village was hit by the plague, several famines and wars. At the end of the fourteenth century there were in Castries fifty people. In 1495 the family bought the barony La Croix de Castries to Jean Pierre. Around 1520, the former castle was demolished and rebuilt on the foundations of the current castle whose history, for five centuries will be closely linked to the village. After years of fragile peace and brutal wars to the terrible year of 1622 when the Duke of Rohan, Head of Reformed Churches, ordered the demolition of the walls and filling of ditches, to better defend Montpellier, place of safety Protestant , of which Louis XIII troops approaching. In 1985, the castle, a historical monument since 1966, is bequeathed to the French Academy, on decision of its owner, René Count de la Croix de Castries, said "the Duke de Castries' heir of the house of La Croix Castries. Listed in September 2013, the area becomes the property of the town of Castries.