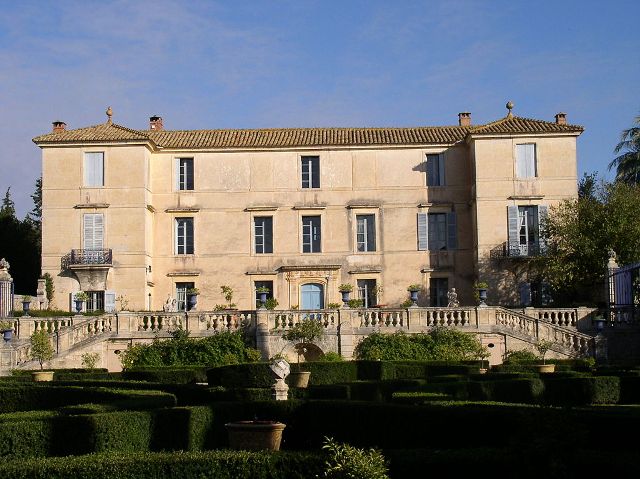 Location: Montpellier, in the Aude departement of France (Languedoc-Roussillon Region).
Built: 17th century.
Condition: In good condition.
Ownership / Access: Private property.
ISMH Reference Number: PA00103525
Notes: Château de Flaugergues of Flaugergues Montpellier is a folly classified as historical monuments.This building is located in 1744 Albert Einstein Avenue, east of Montpellier, in Hérault, near the area of Grammont.Étienne de Flaugergues, advisor to the Court of Auditors of the city, bought in 1696 this area to which it gives its name. It beautifies the property for nearly a half-century to give it its final appearance.In 1811, the castle becomes the property of the Boussairolles family, owner of the nearby castle of Mogère. This area is then transmitted through succession without ever being sold. It is the center of a vineyard and can be visited all year.The castle consists of a central body and two lateral bodies staircase overlooking a garden surrounded by vineyards. The two-storey building on the ground floor, freestone gear, provides the monumental appearance of an Italian villa from the seventeenth century. Large banners emphasize the levels of floors. The hollow tile roof is crowned with finials glazed tile shaped balls on a pedestal, which accentuate the Mediterranean nobility of the building. Overview of the Castle of FlaugerguesThe building is fully turned to the garden. The rear facade is almost blind, false windows providing the illusion. Before the castle, the terrace has two statues of Guyon, Peace and Abundance (1728). The French garden extends to the terrace was restored in the twentieth century and planted ten thousand feet of boxwood, by the current owners and their children. An English park of three hectares garden extends to the southwest and an avenue of trees four hundred meters long leads to a viewpoint where the view leads to the ponds and the sea.The park and gardens Flaugergues are labeled "Remarkable Garden".

How To Get To Château de Flaugergues (Map):