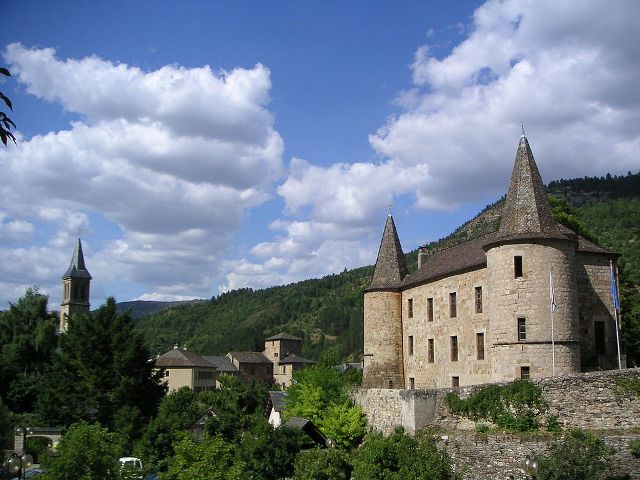 Location: Florac, in the Lozere departement of France (Languedoc-Roussillon Region).
Built: --
Condition: In good condition.
Ownership / Access: Parc national des Cévennes.
Notes:Château de Florac, located in Lozère Florac, is the seat of the Cevennes National Park since 1976. In the thirteenth century, the castle first depended on the Barony of Anduze which also ruled Ales, Sauve and Sommières. Raymond Anduze baron de Florac was lord of Chabrières, Montvert, Eschamassou (Montvaillant) Pierrefort (La Salle-Prunet), Saint-Laurent-de-Trèves, Castelbouc, Montbrun, Javillet, Balme (Barre-des-Cévennes) , Caodaze (Vébron), Moissac and Saint-Étienne-Valfrancesque. Himself paid tribute to the Bishop of Mende. At the end of the fourteenth century, the lord of the barony Florac gives the lord of Ventadour, powerful family of Limousin. In the middle of the fifteenth century to the mid-sixteenth century, the family of Poitiers Valentinois which is part of Diane de Poitiers, takes possession of Florac before giving the barony to the family of the Mark (Ardennes) Montmorency, de Valois . These sell the barony of François Mirand, General Treasurer of France. The current castle of Florac was rebuilt in 1652, on a tuff hill, rock with limestone was used for its construction, the ancient castle site where sat one of the eight baronies of Gevaudan . The barons of Florac were the family of Anduze lords and thus had one of their main castles in place since the thirteenth century. In the seventeenth century, during the religious wars, the castle was destroyed. It will be rebuilt in 1652. At the time of the French Revolution, when many castles in the area are destroyed (mainly the possessions of the bishops of Mende), one of Florac serve as a salt warehouse. Shortly after, in 1810, it will be sold to the state that the use and transform, as a prison and he still has some vestiges (bars on windows, doors cells ...). Since 1976, the castle is newly used as it became the headquarters of the Cévennes National Park which restored. In addition, it houses a permanent exhibition "Landscape of Passengers": a modern performance space, interactive and quadrillingue (French, English, German, Dutch).