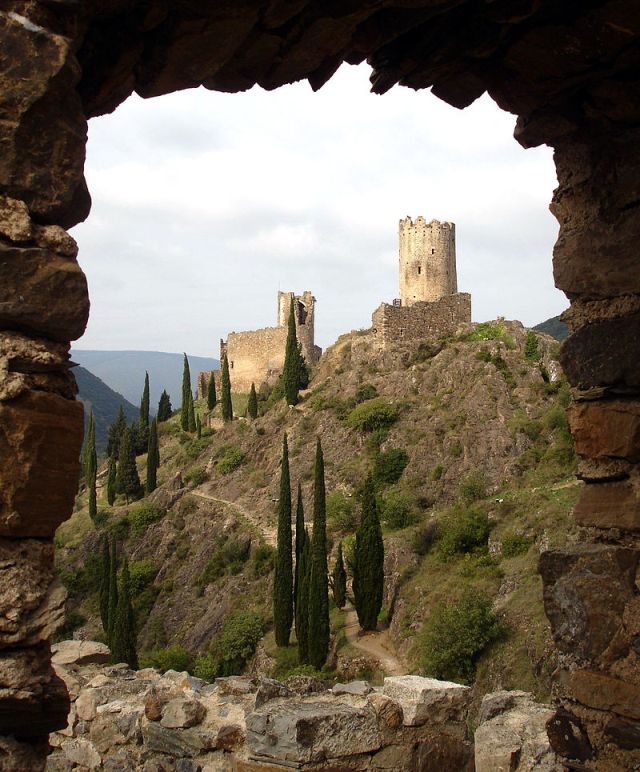 Location: Lastours, in the Aude departement of France (Languedoc-Roussillon Region).
Built: 12th-16th century.
Condition: In good condition.
Ownership / Access: Owned by the municipality.
ISMH Reference Number: PA00102727
Notes: Châteaux de Lastours (in Occitan Las Tors, literally. 'Towers') are four Cathar castles located in the town of Lastours in the Aude department in Languedoc-Roussillon. The four castles are built on a rocky outcrop above the village of Lastours, isolated by the deep valleys of the Orbiel and Grésillou. They were the Cabardès lock hence the name of the main castle Cabaret. They are built 300 meters above sea level in the same axis: Cabaret, Tour Régine, Surdespine Quertinheux and slightly behind. The site is a historical monument since 1905 and excavations are still ongoing. The four castles are part of a single set even if they have no common structure. The natural context of the site led to the economy of a large fortress. The plans were adapted to the rocks on which they are built. Construction is sometimes heterogeneous due to the spreading of alterations made to the castles.In the Middle Ages, the site belongs to the Lords of Cabaret, mentioned for the first time in 1067. Their wealth derived including the exploitation of iron mines. Only three castles are probably built in the eleventh century and their locations have changed over time following the successive destructions and reconstructions. At that time, the lords of Cabaret are at least 22 in number. The castles have experienced the events of the crusade against the Albigensians. Indeed, the lords of Cabaret are closely related to the Cathars. The villages around the castles welcomed many Cathars. The fortress belongs to the period in Pierre Roger de Cabaret faithful Raymond-Roger Trencavel who fought beside him in the defense of Carcassonne. The site suffered from the 1209 attacks Simon de Montfort. The site resists victoriously to attack. But the cross Bouchard of Marly then lord of the castle of Saissac was captured by Pierre-Roger. His release was negotiated against the surrender of Cabaret in 1211. In 1223, the lords of Cabaret show Cabaret their land and became the seat of the bishop of the Cathar Carcassès. Pierre-Roger Lord resisted for many years to Simon de Montfort attacks. But in 1227, the castles were again besieged by Humbert de Beaujeu. In 1229, Cabaret capitulated. Villages and castles are pillaged and rebuilt to become royal fortresses. The Tour Régine is built by order of the king to assert his supremacy. They become the administrative and military center of six communities forming the lordship of Cabardès. In the sixteenth century, the castles are occupied by Protestants. They are dislodged by the Joyeuse Marshal in 1591.The four castles are classified as historical monuments in 1905.