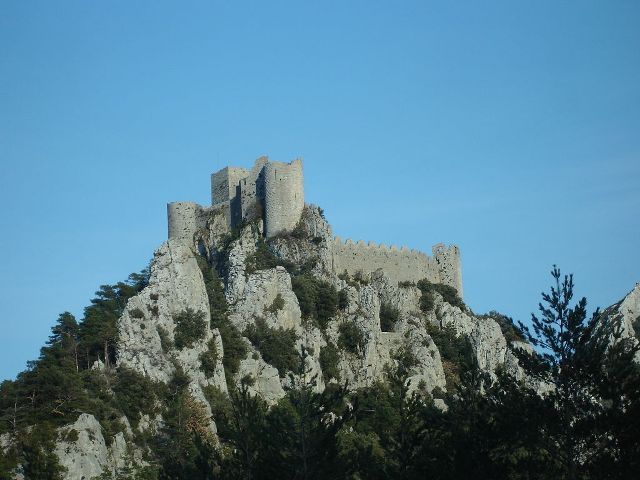 Location: Puilaurens, in the Aude departement of France (Languedoc-Roussillon Region).
Built: 1229.
Condition: In good condition.
Ownership / Access: Owned by the municipality.
ISMH Reference Number: PA00102871
Notes: Château de Puilaurens (Castèl of PUEG Laurenc in Occitan) is a castle located on the Cathar said Lapradelle-Puilaurens commune in the Aude department. This fortress is perched on a rocky outcrop overlooking the valley of Boulzane to 697 meters. He locked the doors of the Fenouillèdes and was one of five son of the city of Carcassonne. It is the subject of a classification as historical monuments since August 12, 1902.The castle is located on Mount Ardu. This name appears for the first time in 958 in a charter which grants the Lothario Cuxa Abbaye Saint-Michel Provost Puilaurens which is composed of the Boulzane or Saint Croix Valley Valley. The document also mentions the presence of Saint Lawrence church and serving of fortified refuge perched Carolingian era. The first lord of Puilaurens Pierre Catala is appearing as a witness in the proceedings of William of Peyrepertuse in 1217. In 1229, William of Peyrepertuse Castle Puilaurens control. Then in 1242, the castle was held by Roger Catala, son of Peter.

How To Get To Château de Puilaurens (Map):