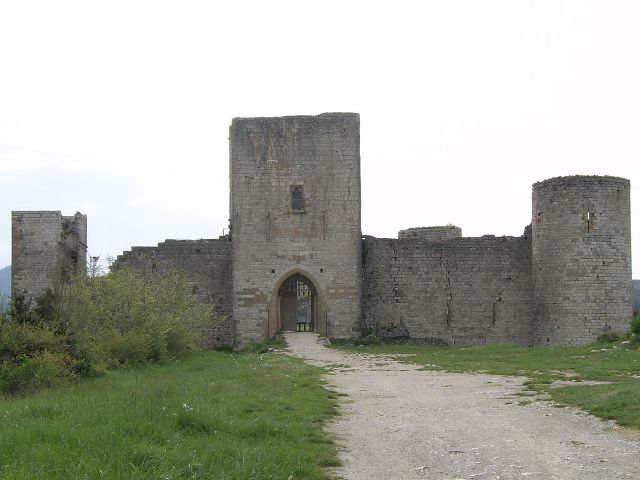 Location: Puivert, in the Aude departement of France (Languedoc-Roussillon Region).
Built: 13th-14th century.
Condition: In good condition.
Ownership / Access: Privately owned.
ISMH Reference Number: PA00102872
Notes: Château de Puivert is a castle called Cathar, in the commune of Puivert, in the Aude department. The building, set on a hill overlooking the village and the lake, rises to an altitude of 605 meters. The site is in the Quercorb region, 60 km south of Carcassonne and 45 km east of Foix. The castle is the subject of a classification as historical monuments since July 6, 1907.The functions of this castle are warriors (the watch and defense), unlike the buildings constructed at that time who had rather religious purposes. The building dates from the twelfth century. The first mention of the building dates back to 1152 and then for the Congost family, at the time of the Albigensian Crusade. These powerful lords of Quercorb regularly hosts the "big", including Eleanor of Aquitaine, for lavish parties; they practice and are shown as Cathar heretics. In November 1210 the castle was besieged for three days by the army of Thomas Pons Bruyère, lieutenant of Simon de Montfort and Puivert became a possession of the kingdom. A collapse of natural dam holding the lake at the foot of the site, causes the destruction of part of the town of Mirepoix, 30 km north, in Ariege, in 1289.

How To Get To Château de Puivert (Map):