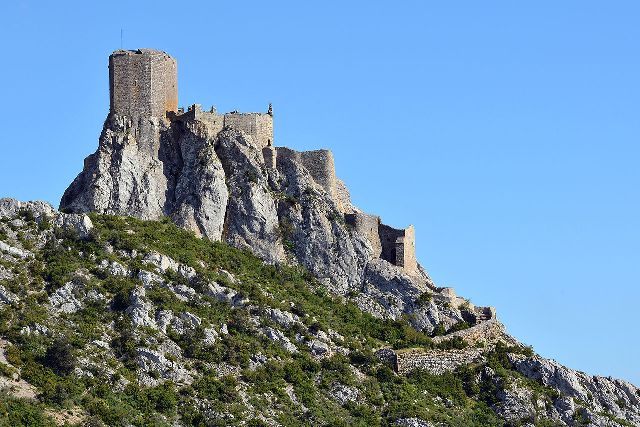 Location: Cucugnan, in the Aude departement of France (Languedoc-Roussillon Region).
Built: 10th century.
Condition: In good condition.
Ownership / Access: Owned by the municipality.
ISMH Reference Number: PA00102667
Notes: Château de Quéribus (in Occitan: Castel Querbús) is a castle called "Cathar" located in the municipality of Cucugnan in the Aude department. This fortress, perched on a rocky outcrop 728 meters above sea level, overlooking the village of Cucugnan and is located on the border of the department of Aude and Pyrénées-Orientales. Castle Quéribus, whose existence dates back probably to the tenth century, was a defense point of Cathar country. After making, it is integrated in the border defense system of France with Aragon. The annexation of Roussillon by France (Treaty of the Pyrenees in 1659), which backs the border to the Pyrenees, greatly reduces its strategic importance. Castle deteriorates until 1951, the date from which it is gradually restored. It is the subject of a classification as historical monuments since October 11, 1907.Guardian of Grau of Maury, Quéribus perched on a narrow rocky peak at 728 meters. It monitors the Corbières, the Fenouillèdes and the Roussillon plain.

How To Get To Château de Quéribus (Map):