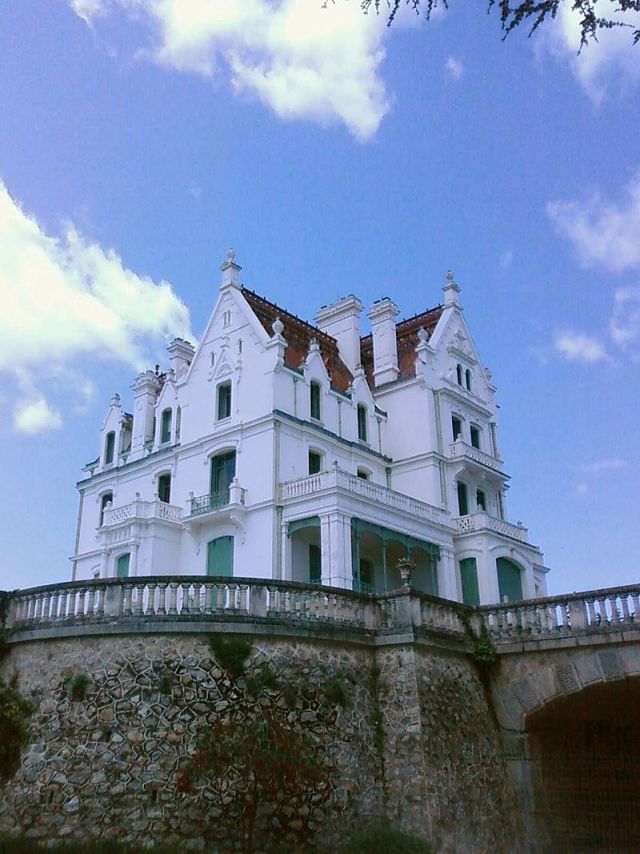 Location: Argelès-sur-Mer, in the Pyrenees-Orientales departement of France (Languedoc-Roussillon Region).
Built: 1888-1900.
Condition: In good condition.
Ownership / Access: Privately owned.
Notes: Château de Valmy is a style of Art Nouveau castle, typical of the Belle Epoque, built on the heights of Argelès in the Pyrenees-Orientales. It is a work of Danish architect Viggo Dorph-Petersen.The construction took place from 1888 and lasted 12 years until 1900, and it opened in 1904. It is a large mansion Art Nouveau with extravagant dimensions, which worked pinnacles, slender turrets, long windows and asymmetrical, the bow windows and ceramic floral medallions form curious but harmonious styles blends. This castle is one of the first private buildings constructed from a reinforced concrete frame.Pierre Bardou, Perpignan wealthy industrialist who developed the brand of cigarette papers JOB founded by his father, Jean Bardou, order the architect Viggo-Petersen Dorph a castle for each of his three children. For his son Justin, Castle Aubiry, Ceret. In one of his daughters, Camille (died 1934) married to Charles Ducup St. Paul (1841-1909), the Ducup castle of St. Paul (bequeathed in 1934 to the Catholic Church) on the outskirts of Perpignan. Finally, Joan, the Castle of Valmy in Argelès-sur-Mer. In 1888, Jeanne Bardou wife Jules Pams, great political figure of the Third Republic: lawyer, president of the General Council of Pyrénées-Orientales, MP, Senator, Minister of Agriculture and Minister of the Interior in the cabinet of Georges Clemenceau (1917-1920). He was unfortunate opponent Raymond Poincare as President of the Republic in 1913. In 1930, the death of Jules Pams, his second wife, Ms. Holtzer, heir to the fortune of Pams and part of that of Bardou, sold the castle of Valmy Victor Peix distiller Millas. The latter extended the winery and created the Valmy and Valmya brands. These quality wines quickly gained great renown. His descendants are still today the owners of the castle. They have revived the wine activity on the area of ​​24 hectares in the 1990s Offering genuine offer wine tourism, there are five guest rooms in the castle and a restaurant open on a unique panorama from the Alberes to the Mediterranean.

How To Get To Château de Valmy (Map):