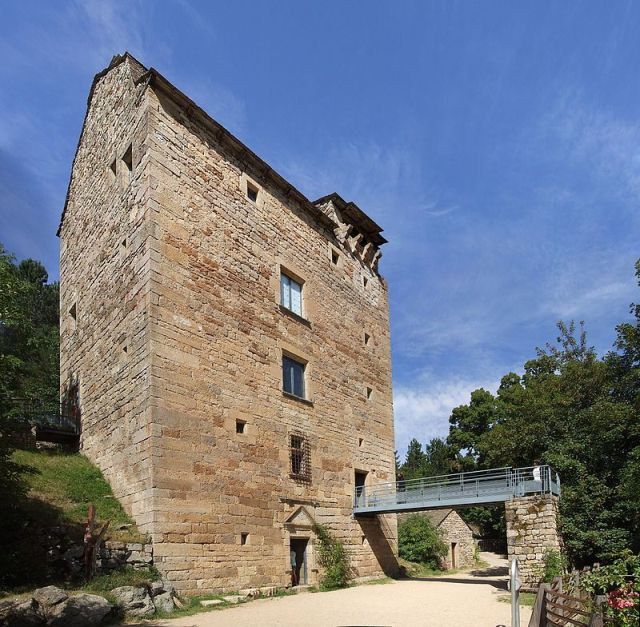 Location: Allenc, in the Lozere departement of France (Languedoc-Roussillon Region).
Built: 12th-16th century.
Condition: In good condition.
Ownership / Access: Owned by a private company.
ISMH Reference Number: PA00103781
Notes: Château de Villaret is an ancient feudal castle in the town of Allenc Lozère (France). It remains today a tower in the center of Nature Park Villaret valley, where it hosts various exhibitions.The castle was probably established in the twelfth century. This is mentioned at the end of this century by the owner, in a petition to the Bishop of Mende in order to establish a chapel within the castle. The distance to the parish church of Allenc is indeed too high. It is undoubtedly in this castle that was born Guillaume de Villaret, the 24th Grand Master of the Order of the Knights Hospitallers of St. John of Jerusalem. His nephew, Fulk de Villaret, also born at the castle, will be his successor. Rets weapons of BressolesIn 1561, the heir to the Villaret, John II, is ruined and forced to sell most of its assets. Castle Villaret was bought by Jean Leblanc, Nîmes royal court and Beaucaire. When her daughter married, the castle becomes property of the family of Rets. But shortly after, the religious wars will destroy a large part of the castle.In 1875 the tower, only sustenance of the castle and grounds are sold to the family Reversat Bagnols-les-Bains. Nearly a century later, in 1973, the Reversat sell all the family Villaret which thus recovers its properties. In 1979, the tower is listed as historiques1 monuments.In 1985 the area falls to Jacqueline and William Sonnet, who will build around the turn of the theme park Villaret valley, which opened in 1993. The tower becomes the exhibition center that take place each year.