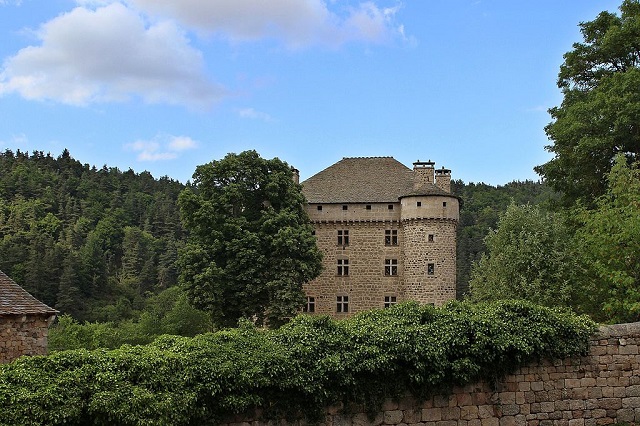 Location: Chambon-le-Château, in the Aude departement of France (Languedoc-Roussillon Region).
Built: 1220.
Condition: --.
Ownership / Access: Famille Vic.
Notes: The castle of the Fort is a castle located in Chambon-le-Château, France.The building is listed as historic monuments in 1973 and classified in 19841. The Chateau du Fort belongs under Louis XIV to Gabriel de Chastel de Pontaut, Lord of the Fort, of Verrieres and Ancelpont, in Gevaudan, married to Marie de Chateauneuf de Randon. Around 1690, their only daughter and heiress, Gabrielle Félice de Chastel (+ about 1695), married Henri Joseph de Beaumont de Gibaud (1666 + 1724 or 1749?), Knight, called the Marquis du Fort in 1696, nephew of Fénelon, Then colonel of the regiment of dragoons of the queen, chatelain of Cateau-Cambrésis (received by Fenelon, archbishop of Cambrai). This Beaumont household has two children, a young girl who died young and without an alliance, and Léon Gabriel de Beaumont (ca. 1690 + shortly after 1713), called du Fort, captain in the regiment of Bigorre, pardoned by the king in July 1713 following And died shortly afterwards of the smallpox, leaving his father as heir. Henri Joseph de Beaumont, Marquis du Fort, who had married in second marriage, on May 19, 1696, in Niort, Charlotte Louise de Nesmond (1642), without posterity, remarried in third marriage, around 1720, to Marguerite de Pujol de Beaufort (1699 + after December 1724), daughter of Guillaume (1673 + 1731), Baron de Beaufort, counselor at the Montpellier Court of Auditors. Beaumont has a single daughter (Marie) Louise de Beaumont (1723 + 1779), titled Marquise du Fort and Countess of Verrieres, dame d'Ancelpont, married on June 16 and 18, 1740, at the Château du Fort, at Jean Antoine Nicolas Francis de Capellis (1711 + 1772), 2nd Marquis of Capellis, gentleman of Avignon, captain of the ship, knight of Saint-Louis. After the death of the Marquise de Capellis at the castle of the Fort, her fiefs of the Fort, Verrieres and Ancelpont passed to her eldest son, Hippolyte Louis Antoine (1744 + 1813), called Count de Capellis, Knight of St. Louis, emigrated in 1792, Rear Admiral in the service of Russia, returned to France in 1801.