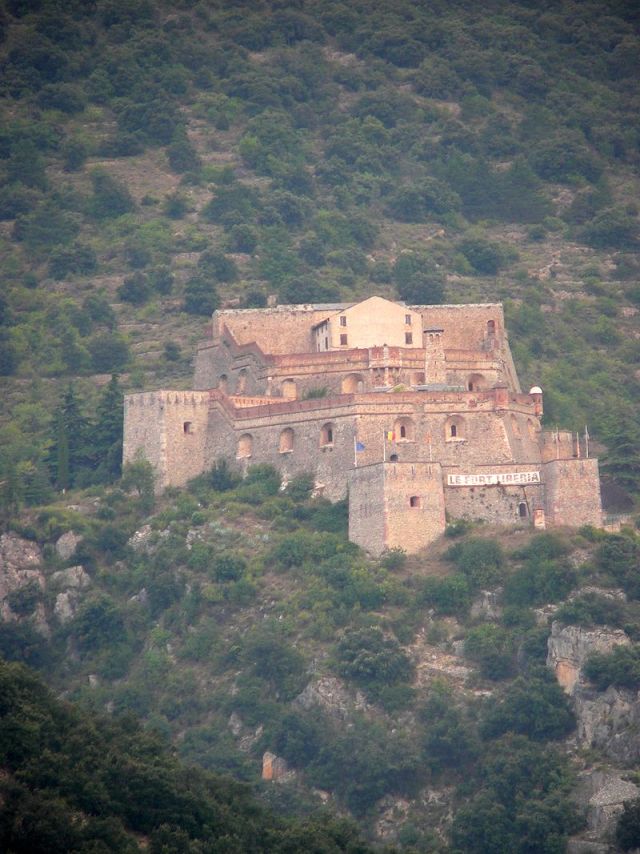 Location: Villefranche-de-Conflent, in the Pyrenees-Orientales departement of France (Languedoc-Roussillon Region).
Built: 1681.
Condition: In good condition.
Ownership / Access: --
Notes: Fort Liberia is situated in the municipality of Villefranche-de-Conflent in the Pyrénées-Orientales department, at the confluence of the valleys of Tet, the Rotja and Cady.It was built by Vauban after the division of Catalonia between France and Spain by the Treaty of the Pyrenees, from 1681, along with the citadel of Mont-Louis who is further up the valley of the Tet. The fort is connected to the city of Villefranche by an underground staircase of 734 steps. He thus dominates the village from a height of about 150 meters. This fort has served time in prison for poisoners of Louis XIV. After the departure of the troops "Domain" puts the hard sale. A private owner first made its appearance in 1925: Mr Laurens. This person, retired former owner, had the idea to make a retirement home for sailors. In order to develop the fort to its residents, Mr. Laurens razed the fire officers on the first level of the fort to accommodate a courtyard. Due to difficult access and remoteness from the sea, the project did not have the expected success. The fort was relisted and purchased in 1955 by Marcel Puy, who made a wedding gift to his wife. Finally, Mr. Puy in 1984 signed a long lease with four merchants of the city and, after three years of restoration, the fort was opened to the public in 1987.

How To Get To Fort Liberia (Map):