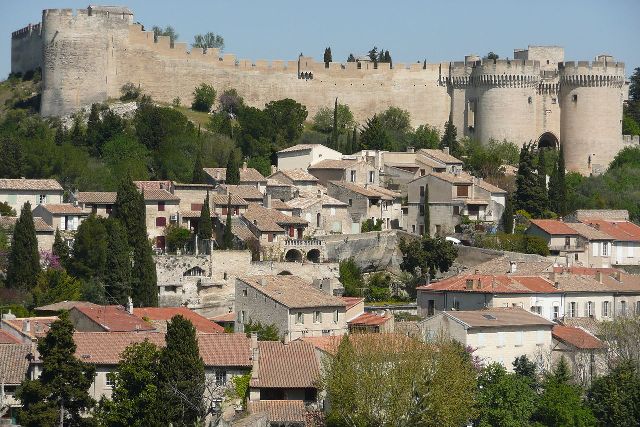 Location: Villeneuve-lès-Avignon, in the Gard departement of France (Languedoc-Roussillon Region).
Built: 14th century.
Condition: In good condition.
Ownership / Access: State property.
ISMH Reference Number: PA00103306
Notes: Fort Saint-André is a fortress established on Mount Andaon that dominates Villeneuve-lès-Avignon.In 1290, Philip the Fair Trade Maine and Anjou against a share of lordship in Avignon. To protect a strategic point on the border of the kingdom marked by the Rhône, he decided to build Villeneuve-lès-Avignon. The foundation act was signed in 1292 with the abbot of Saint-André, plans to strengthen the access to the bridge of Avignon. Between 1300 and 1307, the tower Philip the Fair is thus built on the left bank of the river. The fortification of Mount Andaon itself is business under John II. It must affirm the royal power facing the lands of the Empire and the Popes of Avignon. The fort is also intended to protect the Benedictine Abbey of the tenth century and the Saint-André town whose existence on Mount Andaon is attested from the tenth century. The fort and the surrounding wall surrounding the abbey were built in stages during the second half of the fourteenth century. The Fort Saint-Andre, as we know it today, was as last architect Jean Loubières said Jean du Louvre, the architect of the Palace of the Popes of Avignon. He finished the current building by order of Charles V. Since then, the fort was garrisoned constantly until the French Revolution.

How To Get To Fort Saint-André (Map):